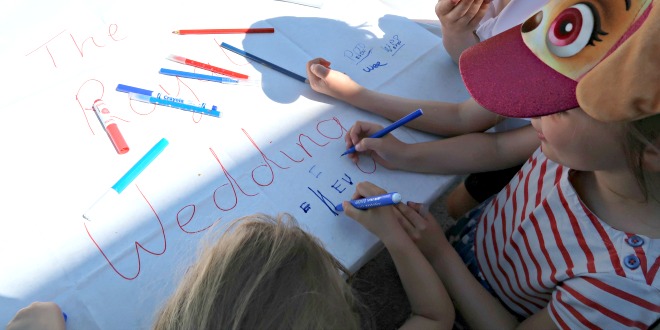 Six years ago next month, I experienced my first ever street party with my soon to be mother-in-law. It was in honour of the Queen’s Diamond Jubilee. I was secretly pregnant with P2 and feeling quite worse for wear if I remember but I was able to feel this huge community spirit. The views, the location and just everything about it made me fall in love with Sevenoaks. That street party, and another community fete, were some of the main reasons I decided to move there a year later. I certainly didn’t hesitate when my MiL asked us if we wanted to go to the street party organised for Prince Harry and Meghan Markle’s wedding. So that’s exactly what we did. My lovely MiL booked our table slot which was provided, organised a packed lunch and bought decorations. Hubby and I didn’t really have to do very much. We decided to watch a bit of the Royal Wedding on the telly first. The street party was 12-4pm so it slightly run into the wedding. I’m not a royalist, I don’t particularly understand it all and the politics of it, but I did shed a few tears during the ceremony. It’s just so wonderful to see something good, something happy on the telly for once. Prince Harry looked extremely nervous at points and the colour of the Queen’s dress, just wow! We walked round to the street party’s location. Found our named table and the grown ups started unpacking the delicious picnic. P2 really enjoyed helping Nannie put cakes on the cake stand, I mean what child wouldn’t love doing that?! The turn out this year was far less than the Diamond Jubilee, but it meant that our table was positioned right next to the common (or field) so we could watch the girls when they were ready to venture off and play. My MiL had packed bubbles which definitely entertained the girls, scary Royal masks were also packed that P3 took a shine to later in the day. The weather was just simply glorious, like it was celebrating life and love too. I actually didn’t see anybody I recognised that day, which is quite weird in our little bubble world of Sevenoaks. But P2 did find a very cute little dog that she decided to attach herself too for a short while. I actually felt this overwhelming sense of peace. The girls were happy running about the grass, not really doing a lot but just being free and being children. I munched jam tarts and filled up on cola. We chatted and watched the other community members too. There was a real buzz! We ended our street party with a nip in the park as Royals. The sun was really shining and made everything feel so hot! So we soon retired back to my Mother-In-Law’s house to have ice cream and watch the actual wedding properly. I could not of had a nicer day, and although I don’t understand the Royal situations, I am forever grateful for spending such a lovely day celebrating in honour of Prince Harry and Meghan.