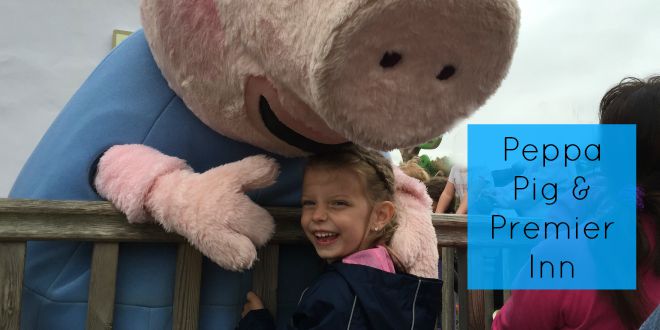 Our Stay At Premier Inn & A Peppa Pig World Day Out

I have no idea what it is about Peppa Pig but she has addictive qualities. P1 was just as obsessed as P2 is now. P2 watches probably on average 10 episodes each day whether it’s on the iPad or in the telly. It’s crazy. I suddenly realised that she’d probably be old enough to enjoy Peppa Pig World at Paultons Park and when I showed her some videos (good old YouTube) she was insisted that she was going. So we booked the hotel, bought the tickets and headed to Paultons Park this weekend.

We didn’t leave until just after lunch and after the nearly two hour journey I was so excited to arrive at the Premier Inn Southampton West. The girls had slept the majority of the journey so they were all super awake and full of beans. The welcome from the staff at Premier Inn was lovely. The lady was so friendly, and although we have stayed at a Premier Inn previously, she explained their procedures and guidelines to me to ensure we would all get a good night sleep. I was close to asking if they supplied a night nanny for P3 but I wasn’t sure that would be laughed at. We were given our key card and booked a table in the restaurant for the evening.

The room was very dark as we entered as the curtains were drawn. The room was set out beautifully and so clean. It had the usual tea and coffee selection, I still think they should also offer hot chocolate, and sugars with little milks. Towels and bed linen is all provided. There was even a towel provided for P3. We had also asked for a travel cot which was in excellent condition. A TV and wifi is also provided.

Premier Inn Southampton West is adjoined to The Vine Inn Pub and a small Wacky Warehouse. With P1 behaving uncontrollably hyper we decided to head to the Wacky Warehouse before going for our dinner to let them burn some steam. However, when we entered we were turned away as they were too busy and told to come back a bit later. We decided to see if the restaurant had space for us then and have dinner a bit earlier. The man was so kind and showed us to a lovely table.

The pub had a little courtyard garden with play area which was very useful whilst we waited for our food. The food was delicious although it did seem to take ages to come out. The prices were also really good. After eating we went back to the Wacky Warehouse where the kids had an hour of fun before heading back to our room. I really think all Premier Inn’s should have a facility like that as its hard to keep children occupied in a hotel room.

I took full advantage of the bath in our room as we only have a shower at home. The kids loved it. Getting them to sleep was tricky though. It’s hard to expect a child to just fall asleep when they are in a different environment and have their parents laying right beside them. P1 was the first to drop off, followed by P3 but as always when in a hotel P2 took a while. Unfortunately we didn’t have the guaranteed good night as P2 kept waking screaming which in turn woke the baby up and I felt a little like a yoyo. But the beds were comfy and P1 slept soundly.

Breakfast is held in The Vine In pub. It’s laid out like a buffet on a table and you help yourselves. The food was all hot and there was a great selection to choose from. P1 and P2 wanted cereal, we gave P3 a croissant which as individually wrapped which I quite liked. Then hubby and I had a full English to fill us up for a day of rides.

Premier Inn Southampton West literally has everything you could want from a hotel; friendly staff, comfy beds, delicious food and great facilities for the children. The rooms are so decently affordable too. Not only of course is it a perfect place to stay for Peppa Pig World, there are a host of activities, restaurants and beautiful walks to go on. Not forgetting its proximity to the New Forest being just a short drive away.

After breakfast we packed the car back up, checked out swiftly and headed to Paultons Park to see Peppa Pig. When we arrived the lady at Premier Inn had said that it was only a 3 minute drive. She was not wrong. It was literally a few minutes, if that, down the road. With this in mind we were the 9th car to arrive and park. Parking is free at Paultons Park which I think is a huge bonus as I know theme parks that charge an arm and a leg on top of the entry.

There was no queues, most likely because the weather was a little dull and we walked straight through the ticket barrier greeted by a very large souvenir shop and a restaurant. There was a short wait to actually be let in as we were early but they opened the gates dead on the opening times.

As we got closer to Peppa Pig World, which is situated inside Paultons Park, I could see the excitement on P2s face. She looked like she’d been eating sweets and for the first time in ages she didn’t want to go in the pram or be carried. She was rushing towards Peppa. It was magical entering Peppa Pig World for the first time. The bold colours and all the characters brought to life before your eyes.

We were able to do so many rides with very little queuing involved up until about 11am. It then got quite busy but not uncomfortably busy may I add. The queues were still moving really quickly and the kids were having so much fun.

At lunch time we headed to the indoor play area so that P3 could stretch her legs and crawl about safely. We had our lunch which was proved very reasonable. We then went to watch the Penguin feeding in Paultons Park. At this point P2 was an emotional wreck and ready for a nap. So whilst Hubby queued with P1 for the Helicopter ride, I took a walk with a screaming P2 and a snoozing P3 in the buggy. It didn’t take long for P2 to fall asleep and I realised that Paultons Park was practically deserted at this point so we headed in there.

Hubby took P1 on her first roller coaster, first proper water ride and carousel. It was easy for them as the little ones slept. P1 wasn’t impressed by getting completely soaked on the water ride as you can tell from the photo but she didn’t cry which was lovely.

When P2 and P3 woke from their naps we enjoyed a ride on the carousel and on the train which goes around the outside of Peppa Pig World. We then headed back into Peppa Pig World so that P2 could do the rest of the remaining rides with P1.  It was nice that I was actually able to do the majority of the rides with P3 as this was something I was quite worried about as I was desperate to be a part of the magic and not just an onlooker. I think the only ride I couldn’t do with P3 was the dinosaur one.

The girls were able to meet Peppa and George before we headed to the outdoor play area. The expression on P2s face nearly made me cry. It was like her biggest dreams were coming true right before her eyes. She was in heaven. P1 who had told us before our trip that she was too old for Peppa Pig, but when she too got to cuddle George and Peppa you could definitely tell she was also in her own magical world.

We are not a family that buys things in the sovenir shops usually. We hate the extortionate pricing and the way P1 tends to expect it as that’s what her Grandparents do. This time it was a huge treat and a complete special occasion and P2 was allowed a Peppa Pig Holiday Car toy and a Dinosaur teddy. The car has been played with every single day since we got home, all day! P1 was asked what she wanted and surprisingly enough she asked for Candy Floss.

Our weekend at Premier Inn Southampton West and Peppa Pig World was simply amazing. At no point did we feel stressed out or completely outnumbered which we frequently do when traveling as a family. The girls really enjoyed themselves and we did too! I’m also so thankful to have caught so much video of our day and so many photos. The video is quite long and was mainly put together as a memory for us to look back on but I hope you enjoy it and can relive our memories with us.