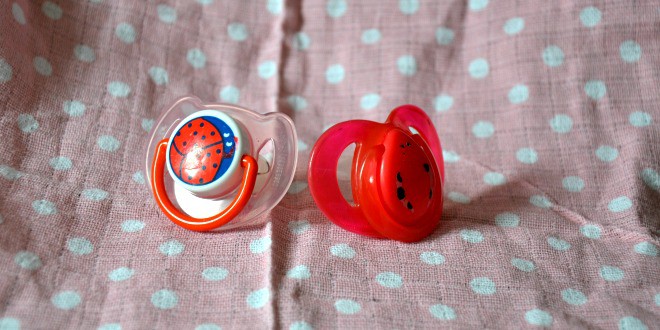 P2 thinks her dummies are with the Easter Bunny.

I don’t remember the events surrounding when P1 stopped using a dummy and ultimately that’s the main reason that I have this blog and wish I’d known about blogging a long time ago. P2 has used a dummy from a baby. It’s been her comfort, my noise stopper and it’s been something she’s depended on in so many situations. When she’s shy, when she’s hurt, poorly or sleepy, it’s always been the dummy that has helped soothe her. And milk but that’s for another story!

We’d told ourselves and agreed we’d tackle the dummy using as soon as she turned two, but with her sudden decision to use a potty started just before her second birthday we decided that there would be too much change happening at once. So we’ve put it off. Then at P2s two year health check, the health visitor suggested something to us. We should give her dummies to the Easter Bunny. Make it a fun situation not a bad one. Give her something in return as a thank you for giving her dummies away.

The truth is, we were pretty lame this year and the Easter Bunny didn’t stop by at our house at all and we didn’t physically lay her dummies out either. I know, bad parent alert. But that’s where P2 thinks her dummies are, with the Easter Bunny. That’s what I told her on Monday night. I explained the Easter Bunny had brought her a bouncy castle, Easter egg hunt and the trip to see Justin to say thank you for the dummies. Reality is, the dummies are all hiding somewhere in the house where P2 left them as I only have 2 accounted for! P2 has not had a dummy for three nights now. It’s Thursday now and we are on day three of no dummy whatsoever, well a slight suck here and there from her sisters, and I’m honestly shocked at how well she’s doing. She has only physically asked for it once or twice and tell her we don’t have the dummy anymore, she responds with “Easter rabbit dummy now”.

The time we have really noticed a difference is at night. I had planned to just cut the dummy usage gradually, allowing nap and bedtime only. But we’ve actually gone cold turkey. P2 is taking absolutely ages to settle at night now, getting up for the toilet or climbing into her sisters bed, shouting and even sitting playing. Once she’s asleep though she’s perfect.

I feel really proud of her. At just over two years old she’s nearly cracked the toilet and she no longer has a dummy hanging out of her mouth. The last thing left is her milk intake…

Have you ever lied to/bribed your child to get them out of a habit?