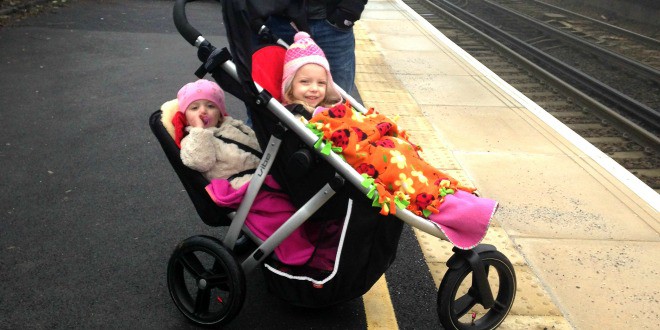 “P2s tantrums are beyond bearable”

The girls have swapped roles. P1 and P2 that is. I’ve wrote many posts about how naughty P1 is and how I don’t know what to do, and generally P2 has always been happy and well behaved. This past week or so we’ve seen some huge, horrible changes in P2.

P2s tantrums are beyond bearable. She does the throwing on the floor, kicking legs and screaming. She’s bossy and if she doesn’t get what she wants then literally all hell breaks loose. She doesn’t give in either like normal children. Normal children will give up after say 10minutes give or take. Not P2.

To give an example of what we are dealing with, yesterday we headed to Disney On Ice at the O2 arena. P2 got upset about getting dressed (unusual) but apart from that it started quite well. So much happened that I’m not quite sure where the behaviour switched. I think it was when we arrived at the train station. She wanted to get out of the pram and was shouting and wiggling. On the train she was allowed out of the pram. Both girls behaved quite well.

Then she ran out of milk. My fault for not packing more but I’ve been trying to cut it down during the day and thought she’d be occupied. I was very wrong. She screamed. Shouted. Kicked. Screamed some more and caused utter disruption. It was embarrassing. It continued on and off until we arrived at the O2. Then in her fury she managed to lose her dummy. I hadn’t packed a spare – again my fault.

Hubby went into the Tesco Express at the O2 to get some milk. By that point she was hysterical. Screaming for milk and her dummy. Nothing we did or said calmed her. She even refused the milk. We carried on and joined the queue to get our tickets. P2 still screamed with great effort. Everyone was staring. Everyone was rolling their eyes. After 15minutes Hubby went back to Tesco Express to get her a new set of dummies which cost the earth!! After being given her dummy, and not having any milk whatsoever may I add, she fell asleep in Hubby’s arms. We were well and truly ready to turn back and go home, P2 clearly didn’t deserve the treat and the O2 were having a struggle to find our tickets but looking at P1 sitting in the pram, calm, quiet and so well behaved throughout the journey and throughout her sisters tantrums kept us in the queue. After over an hour of trying to sort out the ticket problems we were given our tickets and headed to be seated. P2 seemed happier after her nap.

I don’t know whether we can blame it on the fact she’s not been well or if it’s terrible twos but I know we are going to go completely insane if this continues. It doesn’t just happen when we are out, this behaviour happens at home too. Usually when she’s not getting her own way or she’s tired but the outbursts are happening much more frequently the past few days. Then she has the cheek to tell us we’re being naughty!!!!

P1 on the other hand is being amazing! She’s so helpful at home, helping to feed P3 or getting herself breakfast and dressed. She seems to have grown up so much since turning 6. She’s listening a little better and is more understanding with P2 when they play. I’m really pleased but have a feeling things will get bad again when school starts.