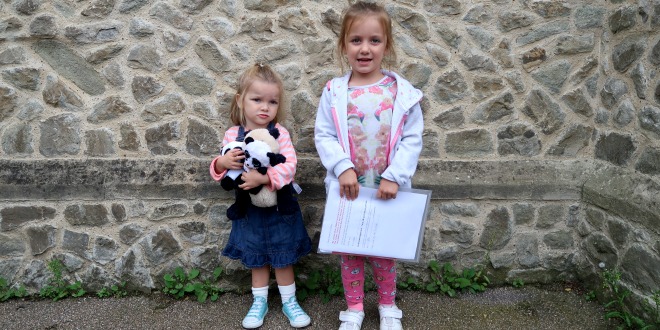 P3 Had Her Introductory Session At Nursery/Preschool

I have been waiting for this day for such a long time. I was awake so early, getting organised, putting my makeup on and my clothes. Typically P2 and P3 didn’t wake until quarter to eight, like really?! Why didn’t they do this in the holidays?! Somehow we still managed to be a little rushed out of the door.

So in case you didn’t guess by the title, P3 had her first introductory session at preschool today (the day I’m writing this anyway). It was a short session of just over an hour for the newcomers only and parents had to stay. With P2 still on her summer holidays, she had the job of accompanying us back to her old preschool.

We was early as usual, Hubby took P1 round to school then met us at the preschool. We took the obligatory first day photo by the wall with her panda and two Bobo’s. Just like we had done for P2. Strangely enough I had read both P1s drop off location email wrong and the preschool start time too so we ended up being super duper early, like half an hour, but it didn’t matter. The lovely thing about our preschool is that it honestly feels like an extension of family. Waiting actually made me feel nervous. I hadn’t been, I’d felt nothing but pure excitement for P3 to grow her own wings finally. It suddenly it hit me that actually my little leech was about to step into a world of independence and I wasn’t going to be the one to comfort her when she felt uneasy or if she’d pooped her pants. She still feels so little even though she has a mighty personality.

New faces of new Mum’s arrived in the foyer. I am actually a Parent Rep for the preschool this year but I felt really nervous about speaking to the new Mum’s who were probably all feeling just the same as me. Like they were watching their little baby grow up and take big steps.

The doors opened at quarter past nine on the dot. P2 led her little sister in. Before P3 would just wander off and play with the toys whilst we said our goodbyes and got P2 settled at her table. This is exactly what P3 did, everything was different but she didn’t really know because everything was just the same as a few weeks ago before the summer holidays.

Both Hubby, P2 and I tried to bring P3 over to her table. We found out who her teacher was which was brilliant news. I wanted someone who was a bit more hardy if that makes any sense because anyone less than that would crumble with P3’s feisty personality. As expected P3 didn’t want to go to the table, everything has to be done on her terms and that’s just how she’s always been. So we just let her play for a little while before trying again.

They had the task of decorating their hangers. They had stickers to stick on. Eventually we did manage to entice her over for a few minutes to stick some animals and dinosaurs on to her hangers. Then came the next slice of independence, going with her new teacher and her new table of friends to wash her hands. She put up some resistance and then her big sister stepped in, she held her hand and off they went. P3 then wouldn’t let her sister out of her sight and they sat together for snack time, had some milk in a cup and then headed off to play.

The hour and a bit went by really quickly. Despite P3 being quite reluctant to be spoken to by her new teachers and friends, she was happily playing on her own quite comfortably. Tomorrow will be her first day flying solo. I am honestly terrified for the drop off in the morning. I am terrified for the coming few days and I honestly didn’t think I would feel that way. I thought I’d be skipping up to the door and shoving her straight through it before running away for some peace and quiet for three and a half hours. But those three and a half hours are now looking to feel quite empty.

Why do they grow so quickly?