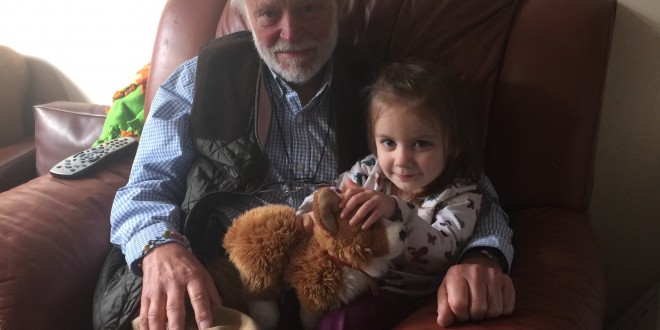 “P3 stared at him warily”

Wednesday’s are always one of our busier days but at the same time it’s quite a pleasant day as P1 goes to an after school club. This week we invited my Grandad over.

When my Grandad travels the 40 odd miles from his house to ours, I always worry that he’s coming such a long way and we never really plan anything. This week was different.

He arrived just as I was walking out the door to head for our morning Parent & Toddler group. Despite leaving with plenty of time, he was cutting it fine to walk with us. But we’d agreed to meet there if he was late. P3 stared at him warily.

He joined us for Parent & Toddler group. He met a few of the friends I’ve made over the months. Chatted the ears of one lovely lady and was made a couple of teas whilst there. I think he actually enjoyed himself. P3 just wandered up and down the hall with a dolls pram the entire time we were there.

We then went to collect P2 from nursery. I got to show him around and he was able to half listen in to the progress report we’ve had from her key teacher. I then made everyone fajitas. I’m not sure he’d had them before as he was asking lots of questions but he polished the two off so I think he enjoyed them.

P2 was super excited about her Great-Grandad coming along to Gymboree. The poor man looked exhausted already but we took a stroll down and he was able to join in all the fun. I was so pleased to be able to show him exactly what I go on about over the phone. Grandad came with us to pick P1 up from the after school club and even spent dinner AND bedtime with us too. It was just after 7pm that he left. Much much later than the usual 3 or 4 o’clock.

I always feel so emotional in the lead up to my Grandad coming over and even more so when I watch him drive away. Since my Nan died, I feel like I have to cherish every single second and moving away from Grandad has been tough. I’m so thankful to have shown him a part of our new world and hopefully the new me.

He was exhausted. For an 84 year old, he did good on Wednesday! Although, I need to remember to get the big camera out and snap lots of photos.