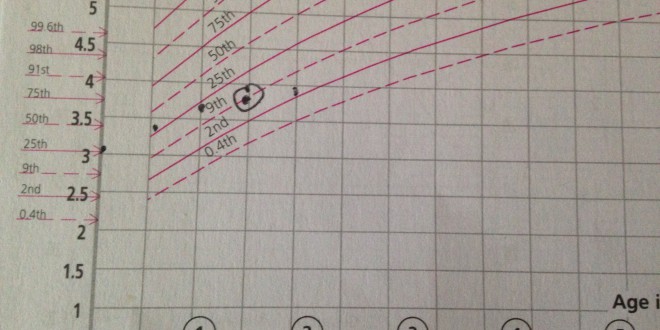 “P3s weight gain is not good, in fact it’s awful!”

At the 6 week checkup P3s weight had dipped slightly. It wasn’t a huge concern because she’d just been ill and on antibiotics. Then today, we visited the health clinic for a weigh in and to see the health visitor. That’s when it smacked us right in the face. P3s weight gain is not good, in fact it’s awful!

This isn’t something I’ve experienced. The initial loss for P1 happened but it then followed a line on the growth chart. P2 slowed slightly and then followed a line at about 10 weeks. But P3 has gained just 4oz in two weeks. It’s bad. She now weighs 8lbs 11oz. If she’d followed the line she was on, P3 should have weighed somewhere nearer 10lbs today. But she doesn’t so now what?!

Well I spoke to the breastfeeding clinic, apparently everything I’m doing is correct. She’s latching fine. They witnessed her feeding fine. They seemed a little worried about the gaps between her feeds as she does tend to go quite a long time, especially at night.

The health visitor wants to weigh her again next week. She has said if things don’t improve she’ll suggest giving P3 a bottle of formula before bedtime. I’m worried. I desperately want her to thrive and gain weight but I want that progress to be because of me, solely me, not because I’ve had to “top up” her feeds with formula.

I feel like a failure. Hubby has said its not my fault but surely it is. She’s fed entirely from me. All me. We have a lot to think about and a lot to discuss. Whether this is the end of our breastfeeding journey, whether I’ll persevere and ignore the HV suggestions of adding formula or give her the top up of formula milk. Right now there’s a lot going through my mind.