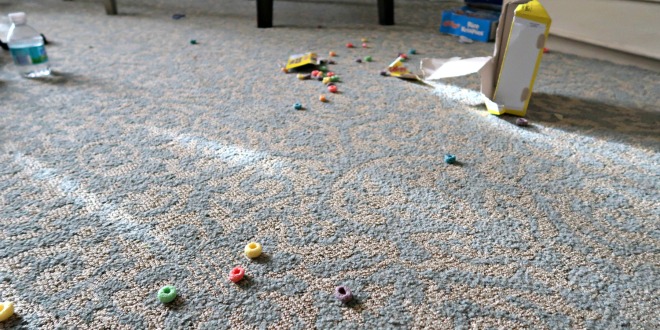 Waking up on our last day in the Loews Portofino Bay Hotel felt strange. Our time in Orlando seemed to have whizzed by in a busy blur full of happy memories and laughing that we just didn’t want to go home. I felt more aware of our surroundings and found myself taking it it, taking mental pictures as I longed for a time that we could return. Despite the fact we hadn’t even left yet. I spent time before breakfast packing up our belongings and getting ourselves ready to check out. I took the opportunity to take fresh photos during day light of our hotel room. Once we were packed up we called for a Porter to help us with our bags and headed for the Lobby where we could check out. I had a small bill to pay for our milk on the first night and the phone calls made to the babysitter. The check out process was super easy though and we were able to keep the cute, personalised room keys. We then made our way for breakfast. We tempted to head to Starbucks but decided to stick with what we knew and headed to Trattoria Del Porto. It was really funny how we had formed a little routine. The girls ate the same things each morning and we all sat in the same spot every single morning. What was fantastic is that the quality of service and the friendliness of the staff never changed. It was always top quality and we felt so at home. It felt much busier and I think that this may be a changeover day for checking out and this may have contributed the the volume of people in the harbour and restaurant. We had a few hours to waste before our airport transfer was due to arrive. Hubby wanted to take P2 back over to the Universal theme parks as she was asleep when we went the day before. P2 was itching to have another ride of the E.T Adventure so that’s what they did. We watched them head on the water taxi and I decided to take P1 and P3 back round to the Beach Pool so that we could chill out. We didn’t have our swimming costumes and I had told the girls not to enter the water. Of course those words go on deaf ears with a toddler don’t they? As you can see, she went straight in and completely soaked her nappy and shorts. I tried not to let it worry me as I watched P1 and P2 having a brilliant time on the sandy beach. The weather was just amazing and I quite liked lazing around the pool on the comfy beach chairs. A staff member came out and played with them for a bit too which I thought was really lovely. We had about an hour spare once Hubby had returned from Universal Studios. We bought a little snack and there was a very clear sense of sadness during the waiting period. P2 had got rather upset and even cried saying that she didn’t want to leave and she wanted to see her friend Dawn again. It was really upsetting because I felt exactly the same, I wanted our dream holiday to go on forever even more so that I normally do when it comes to holidays. I tried to distract P2 by allowing her to take some photos on my camera. The bottom three are P2s productions. Our airport transfer was lovely and really helpful with the bags and children. They had car seats provided which was super reassuring. I was really looking forward to seeing what the American airport looked liked and slightly apprehensive about the security checks as I had read before that they can be quite strict. There wasn’t, or not that was made aware to us, any family friendly security zones unlike at Gatwick. They had a disabled bit for stroller users. It seemed to take ages to go through security as we had forgotten about a carton of juice that was hidden right at the bottom of our rucksack so that needed extra checks.

Our plane was a little bit late boarding and we actually felt that the staff at the gate were really unhelpful. It was our first experience of bad service since arriving at the airport in London. So we were a bit taken back by it. It was was clear that Hubby and I were juggling three small children, hand luggage, a folded double stroller and trying to hand tickets to them but nobody offered any assistance. However, boarding the plane went smoothly and I was quite looking forward to having a snooze. P1 and P2 were quite restless at the start, we had banned them from activities in a bid to get them to focus on going to sleep as it was actually bedtime. However, it took them about an hour to settle and get comfortable before they did manage to fall asleep. It was also important that Hubby got some sleep as he was driving us all the way to Norfolk from the airport. Funny enough I think I managed to get about an hour of sleep the entire 8 hour journey. I had a lady next to me who seemed adamant that I was in her booked seat and then felt the need to pretty much sit on my lap the entire journey. I then had P3 sprawled across me on the other side, fidgeting continuously in her sleep.

The staff on the plane were so friendly though. They provided plenty of snacks and meals during our flight. During a night flight they have a time when all the lights go off and everything seems more peaceful, if you forget the loud engine noises and wind from outside. Unfortunately, the flight home was super bumpy and this made both Hubby and I feel pretty queasy. With an hour left to go P3 also felt ill and ended up being sick. I felt so awful for her as she’d managed the 9 hour flight to Orlando absolutely fine. I was pretty thankful to get my feet back on the ground the other end.

I felt instant holiday blues though as the weather was colder and it already felt like a life time ago that we were in Orlando making memories. The Customs procedure and collecting our bags was much quicker that it was in Orlando and we were soon back in the car on our way to Norfolk for another adventure. I had forgotten how pretty our Autumn trees are though. I can’t wait to travel back to America and hopefully visit Universal Orlando Resorts again. I would highly recommend Virgin Holidays as a family friendly airline and holiday provider. We were super impressed as a whole.

Here’s our last video of our holiday adventures. Don’t forget to check out the playlist for all of them.

You can find out more about Virgin Holidays to Orlando by clicking here, or more about the Universal Orlando Resort, and Loews Portofino Bay Hotel.

Disclosure: I am a member of the Mumsnet Bloggers Panel, a group of parent bloggers who have volunteered to review products, services, events and brands for Mumsnet. I have not paid for the product or to attend an event. I have editorial control and retain full editorial integrity.