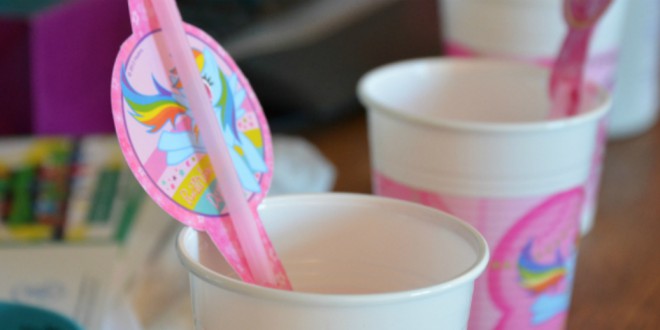 Every time we arrive home from one of P1s friends parties, we get bombarded with requests and ideas that P1 wants for her own party. Last year we didn’t have one, we didn’t have the funds to throw a party in a hall or playcentre and our house is certainly not big enough for it to be held here. So we sort of nodded and hoped she’d forget about it. She didn’t. Obviously!

My MiL is always full of wonderful, creative ideas and during a conversation and a moan about how I felt guilty that we weren’t holding a party for P1 for the second year in a row, she came up with the idea to hold a small house party. Invite a few girls to the house and do something creative, like cake decoration and the usual party games. So P1 picked four friends, which as the time grew closer ended up to being five and then six. We received the My Little Pony Party Supplies to review just a few days before the party which was fantastic. I was up until midnight wrapping my first ever pass the parcel, cleaning the house, setting everything on the work top so that I was organised for all eventualities and decorating the house with the provided My Little Pony banner. We didn’t go crazy on the food shopping as I was only feeding a few mouths. Turkey dinosaurs and Turkey numbers, crisps, mince pies, various biscuits and birthday cake. Everything unhealthy of course!

Hubby managed to pull one of the triangles off the banner when putting it up as it’s quite delicate. In the morning P1 and P2 were amazing by the decorations and P1 was extremely hyper! Only two of P1s invited friends managed to make her party, which was a huge relief to me as I was petrified of hosting a party with so many girls! Hubby had taken P2 and P3 round to my MiLs. P1 had invited her Uncle G too, poor boy being surrounded by girls and pink, especially when they all put on some My Little Pony Tiaras! I took some inspiration from Katie over at Mummy Daddy Me, for the little snowmen biscuits which went down a treat with the children. I was really pleasantly surprised at how well all the girls got on with each other and how they interacted. I honestly expected squabbles or one getting left out but nope! I really enjoyed watching P1 with her friends make lots of mess and getting really creative. I was quite thankful for the My Little Pony plastic table cover which I could wipe the icing off, collect the chocolate sprinkles and shake off outside when it came to tidying up.

The children got really excited about what straws they wanted in their cups, everyone actually chose a different pony which was great! They were equally excited about having brightly coloured plates and napkins which certainly beat the boring white plates we used for decorating the biscuits on!

We played pass the parcel and then they all disappeared upstairs to watch Frozen!! I had a chance to tidy up and sort the birthday cakes into their already pre-filled party bags. That was the best thing about the party kit we received. I never know what to put in party bags, whether I’m putting too much or too little but Party Bag Supplies really have the bags just right. There’s a sweet, a armband/bracelet, a ring and hair clip, stickers and a bouncy balloon. The characters and colours vary between bag but they all have the same which is great and stops any arguments.

The party went so smoothly. I had a lot of fun interacting with P1s friends and it was no where near as stressful as I’d expected it to be. I think we’ll end up doing this every year as it didn’t cost us very much to host.

User Rating: Be the first one !
Share
Previous “I get such a warm fuzzy feeling when I receive gifts”
Next MAM Starter Set & Soother Pod Review