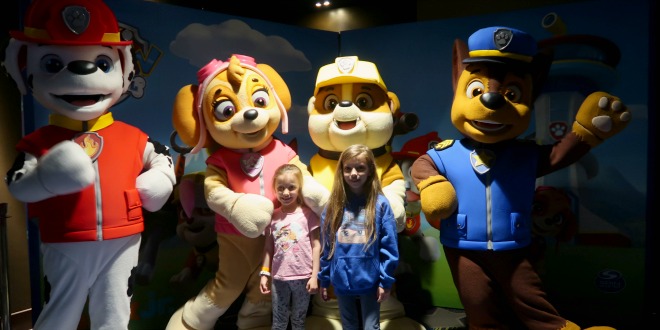 Last weekend we got invited along to watch the preview of the new Paw Patrol: Mighty Pups movie. Eva and Elsa specifically are big fans of the pups so I couldn’t turn down our invite. The preview was being held at Showcase Cinema De Lux in Bluewater Shopping Centre. There’s lots going on at Bluewater and we visit there often but have never been to the cinema. It was on our list of to dos. We arrived with plenty of time to enjoy the fun in the foyer. Whilst we waited for the film to begin, the girls coloured the activity sheets and played with the huge Chase balloons.

Showcase had also invited the pups from the Paw Patrol to meet. Sadly I couldn’t persuade Elsa to pose with them but the other two enjoyed it!

Showcase Cinema has 21 cinemas across the UK. 11 of those cinemas have the XPlus experience which is a fully immersive wall to wall ultra high definition screen with 360 all around sound. The Bluewater Showcase Cinema also has reclining seats.

When the girls saw the seats they all squealed with delight. In fact so did Hubby and I. We’ve never experienced that and I was truly concerned I would end up fast asleep. They were so comfy! I don’t want to give away any spoilers of the new Paw Patrol: Mighty Pups movie, but I will say that it was a really good film. It was fast paced in action which kept the kids fixated. The Paw Patrol get super powers and they have to save the day! Elsa was laughing and pointing throughout.

The film itself lasts about 45 minutes then it’s followed by an episode of Top Wing and Butterbean’s Cafe. The two other episodes were not really needed in my opinion, but it was a lovely touch for the kids. I’d definitely recommend it for half term fun.

Paw Patrol: Mighty Pups is out on the 17th May 2019. You can book your tickets through the Showcase Cinema website.

Disclosure: This is a collaborative post. We were invited along to preview the movie, we have not been compensated
Share
Previous A Cave Tour At Poole’s Cavern
Next Bluestone Myths & Legends