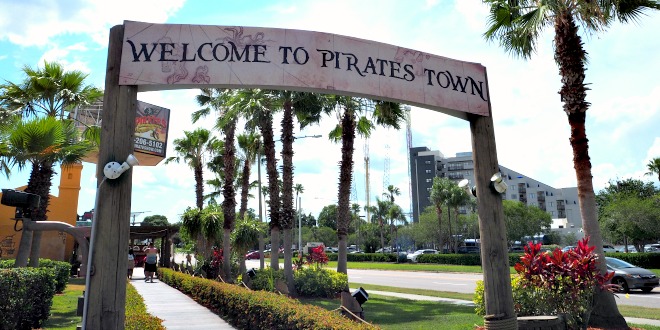 Hubby and I woke up early on our first morning in the new Two Bedroom Suite with Volcano Bay view at Cabana Bay. As a Universal Orlando Resort hotel guest, you are able to get entrance into the parks an hour before they open. It’s a really useful perk of being a hotel guest and I’d highly recommend staying on site if you can.

The girls were all fast asleep still so we asked my Mum if we could slip away to have some couple time in Volcano Bay. Thankfully she agreed so Hubby and I popped on our swimming costumes and headed for the opening of Volcano Bay at 8am. Hubby and I spent just over an hour riding all the slides, we even found some we hadn’t tried before. It was just nice to be adults for a little while and enjoy each others company whilst having fun on the slides. We laughed and joked together. It was lovely.

When we returned to our room I half expected carnage and my Mum pulling her hair out, but it was quite the opposite. It was just past 10am and both Eva and Elsa had only just woken up when we arrived back. I was shocked and clearly the Universal Cinematic Celebration from the night before had totally tired them out.

We decided to head for breakfast at the Bayliner Diner. The food is really good value and you get so much. Freya had picked to have some waffles, Eva had some fruit, Elsa had sausages and Hubby and I had the “full English” American version. We had very full bellies ready for another fun day.

The girls didn’t really want to go to Volcano Bay but somehow we managed to persuade them. Once we got back to Volcano Bay they totally changed their minds and was super excited. We decided to stay in the children’s splash areas called Runamukka Reef and Tot Tiki Reef. This area is perfect for all aged children as there’s so many water play activities. We had actually left my Mum in the hotel room to chill out. The heat and high level of energy needed so far on our holiday had wiped her out. My Mum is actually a kidney transplant recipient and so she wears out easily.

We returned after nearly two hours there. Funny enough the girls didn’t want to leave but we had dinner reservations to attend so we made our way back to the hotel room to get freshened up. I filmed our Volcano Bay day and you can watch it below. The next part of our day is below with a separate video too. If you read some of my earlier blog posts from our Orlando trip, you will know that we decided against hiring a car. Instead we had been using Uber to transport us to places. It’s really easy to arrange them from your phone and just hop in and out where you please. We ordered our Uber to take us from the Cabana Bay Lobby to Pirates Dinner Adventure.

It was another thing that our friend Dawn had made us aware of as her son is one of the lead actors. We was kindly gifted the tickets by Pirates Dinner Adventure. I  had done a lot of Google searching ahead of our visit and watched a few videos. I was very excited to experience something really new to us. Pirates Dinner Adventure is a family friendly dinner show suitable for all ages. It’s located in the heart of Orlando along Carrier Drive. The outside is decorated in the pirate theme to get everybody excited. There are two shows on each day during peak times, 5pm and 8pm. We had been booked for the earlier showing time.

As you arrive you have the ability to capture a cheesy photo that you can purchase. We opted out of this as Elsa absolutely detests having her photo taken unless it’s on her terms so we swiftly made our way into the waiting area. In the waiting area there are several bars, a few seats, a pirate themed shop and toilets (the most important thing as a family with small children). Although we arrived quite early, and we are usually the first to everything, there was actually a great number of people already inside. These lucky people had grabbed the seating areas so we stood to wait for Dawn. Dawn had brought with her a few of her friends which was lovely. My Mum purchased a souvenir cup (which you could then refill for a cheaper price) and we waited for the pre-show show.

The pre-show is where we got the first glimpse of Dawn’s son, Josh. He leads this part of the show. It’s sort of a background to the story and plot. You get to meet the characters, have a laugh and hyper up ready for the main show. I filmed parts of it which feature in my video below but obviously didn’t want to give too many spoilers for anyone planning to visit themselves. I’m sorry for the really bad quality of the photos in the pirates section of this blog post, as you can imagine the lighting was low to set the scene and atmosphere and we wasn’t allowed to use flash. Guests were then allowed to enter the main theatre. The seats are set around a huge pirate ship that’s anchored in a 300,000-gallon indoor lagoon. The seats are bench style with tables in front. Quite obviously not the typical theatre experience I’m used to. We were shown our seats.

When you book your tickets for Pirates Dinner, you are asked what meal choices you would like. An adult ticket costs $63.95 and a child is $37.95 these include a 3 course meal and soft drink in the main show. Anything bought in the pre show has to be paid for by yourself. Under two year olds are free, need a ticket purchased but there is no meal included.

As the pirates of the show started getting everyone excited for the fun to begin, there was lots of servers bringing out the starters. Our starters was a salad with dressing. It was pretty simple but a decent amount of food. They also poured our drinks too. At this point the show had begun.

The main show is full of action, very loud music and live tricks. The acrobatic skills is incredible and the humour is hilarious. I found it quite hard to follow the plot but I don’t think it actually mattered.

Our main meal came out about half way through the show. It’s worth noting there isn’t an interval during the show. There was four options for us to pick at the time of booking: chicken meal, pork loin with shrimp meal, pasta meal or gluten free pasta meal. The kids had either nuggets with Mac n cheese, pasta or gluten free pasta. The adults in our group all picked the chicken meal which was pretty much a roast dinner on our plate. It was delicious! The kids had the nugget option with Mac n cheese. During the Pirates Dinner show there are lots of opportunities where the audience gets involved with cheering and clapping etc. They also got the children involved with a group being invited on deck and then Eva even got the chance join the pirates as they sailed on little boats around the outside of the pirate ship. She was in her element.

Our pudding came out not long before the end. It was a delicious chocolate brownie covered in a dreamy chocolate sauce. This went down well with all of us but especially Elsa who has a real enjoyment of chocolate brownies.

The acrobats, pirate entertainers, sword fights and songs get quite intense towards the end with shocking performances that left me perched on the edge of my seat with anticipation. It was a wonderful experience. The show ends with the love story finishing and a sea monster being defeated. Everything a pirate adventurer could ever want in one show. I would highly recommend booking to see the Pirates Dinner Adventure show. It’s unlike anything I’ve ever seen before and we had a truly amazing evening eating out in style. The kids were in awe, watching and laughing.

After the show, Dawn came back to the hotel room with us as she’d been longing to see the new Volcano Bay rooms for herself. It was a bit of a sad moment as this was the last time we would spend time with her this holiday. She had some amazing gifts for the girls; some of her old tour earrings, bows and memorabilia as she was actually leaving her job as a Universal Tour guide during this trip. It was all rather emotional waving her off.

We all headed to bed quite soon after our goodbyes, I don’t think the girls had truly realised that they wouldn’t be seeing Dawn again this holiday but I felt quite emotional.

Keep an eye out for our next Orlando blog post as it’s a good one, Hubby ticked off a bucket list item of his by visiting Kennedy Space Center!