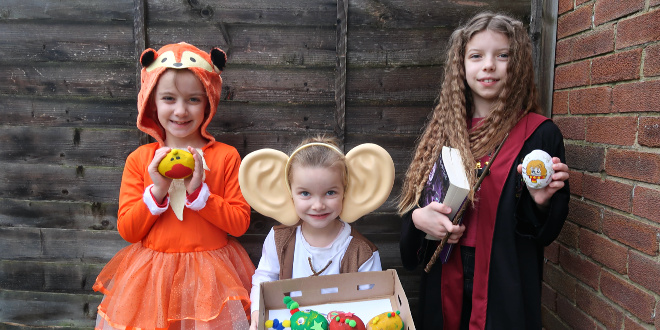 One of my favourite things during the school year is World Book Day. This has probably stemmed from my love of books but also over the past few years, seeing my girls getting excited and planning their costumes.

So you may wonder why on earth I have a photo featuring potatoes? This year, the girls’ school have a voluntary competition for the children to take part in, as well as the fun in dressing up. The competition was to create a book character potato. I know odd?

The crazy thing about it is that there are loads of designs on Pinterest so this whole potato character is a thing! Thankfully this was quite a simple craft task to take part in which is why I wanted to share this. Ok, it’s probably not very “food waste” friendly as you wouldn’t be able to eat the potato afterwards but it was a good rainy day activity and my girls enjoyed it.

All you need is a potato of any size, we used jacket potatoes so that the surface area was a bit bigger and allowing more room for getting creative. Then you just need some acrylic paint and other fun crafty bits like pom-poms, pipe cleaners, cocktail sticks and googly eyes.

Then the rest is up to you.

I originally used Pinterest for some inspiration. Before going to school that day we had chosen to do Hedwig from Harry Potter, Harry and the Hungry Caterpillar but as you can see their end choices were different.

Freya painted a white background to her potato and then carefully used a mixture of paint and pens (these were ones they use for rock drawing) to create a cute Hermione character on her potato. You can’t quite see it in the photo but she even put gold symbols across the potato too.

I love Eva’s potato character. The Usborne Books Farmyard Tales series features a tiny yellow duck on every single page of the book, he’s a fun little addition to the story and I love that Eva created her potato based on that. It was very easy to do, with yellow paint over the whole potato and red beak. Eva finished him off with a pom-pom quiff.

Elsa had her heart set on the Very Hungry Caterpillar. This required three potatoes, it would have worked better with some smaller white or new potatoes but we only had the jackets to work with. She didn’t ask for any help at all doing her potato, I was impressed. She picked the colours out, added the pom-poms and googly eyes, then used cocktail sticks to put the potatoes together. I loved how she used her initiative to add two cocktail sticks for antennae and then poked pom-poms on too. The result was a very cute Hungry Caterpillar!

I did film the creative session we had just for fun and memories. It’s a really short video so I hope you will support us in taking a little watch.

I hope you’ve all enjoyed your World Book Day. It’s so important we celebrate and keep books alive.