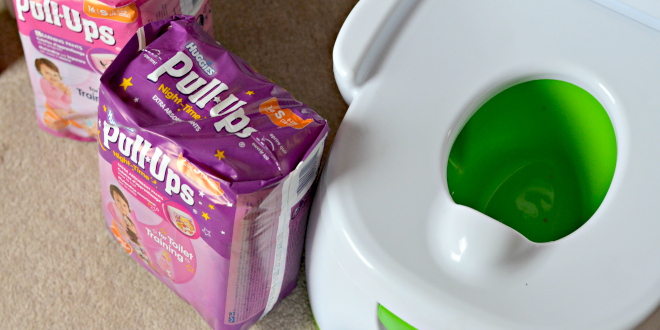 Potty Training For The Last Time With Huggies & Munchkin

We talk about cherishing every developmental first all the time as parents. That first smile, when they sat unaided for the first time, tasted their first bit of food and the day they took their first steps. But for me I think the biggest part and probably the most scary is definitely the potty training phase.

As a first time mum I was petrified and influenced largely by the people around me. I was asked when I was going to potty train my premature daughter when she was two because that person had apparently had her two children on the toilet by eighteen months of age. I was pressured and so the summer after she turned two, I attempted to potty train her. It didn’t go well and I gave up, feeling deflated. Not only was it all the accidents but P1 struggled to spread her legs comfortably over a potty due to her Hypermobility. When she was three years and four months old I tried again and she was completely dry in two weeks with minimal accidents.

Second time round I generally felt more relaxed and was in no rush. The plan was to start when P2 was somewhere around three years old and definitely in the summer. But actually she had bigger ideas which were probably influenced by her big sister. She had no signs of being ready to potty train. So when she just decided she didn’t want to wear nappies anymore and would much prefer the big girl knickers her Great-Grandad had bought to match P1s at Christmas, I was completely unprepared. She was just twenty-three months old! We had many accidents and the process took a good month or so but she did it off her own accord. Although I can’t wait to never have to change a nappy ever again, part of me is terrified for potty training P3. She’s ready and it’s much earlier than P2. She has been telling us of her nappy doings for a long time now. Probably since she was about nineteen months old but I haven’t felt that she’s quite ready. She communicates with her but not quite as well as her sisters did at this age and I think that’s one of my biggest worries. I also think I have a fear of it. She’s my last baby and by having her potty trained means we are closer to saying goodbye to her baby/toddler days. It makes me sad. But I can’t ignore her signals any longer. We have decided that during the six week holidays when the pace of life slows down a little bit, we will get this girl in knickers. I have no idea how easy this will be but I’m definitely taking things slowly. We have got a new Munchkin Odour Eliminating 3-in-1 potty that’s been sitting in the lounge making its aqquaintence with P3 and we’ve stocked up on some Huggies Pull Ups which were a great tool with P2. I’d love to say I’m prepared for this journey, but I’m most definitely not emotionally. I need to read up on how to potty train again because it feels like forever since we did it with P2. Any tips would be very great?! Birthdays for your children are super special days. I find loved one’s birthday’s a bit …