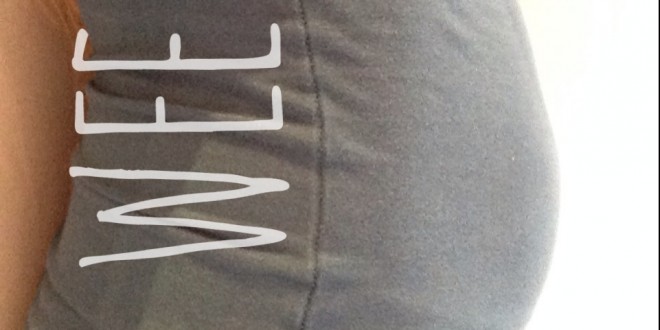 Wow. Half way!! Already. It’s all going a little quick. We know the gender, I’m hoping the suspense isn’t killing everyone who regularly follows. The baby was being very naughty and spent the whole of our scan curled up in a very tight ball – forehead to knees. We’ve got to be rescanned next week to get the last of the measurements they were unable to get this time and we’ll be double confirming the sex then.

With regards to this weeks developments, my bump seems to be rounding out between my hips and feels harder. I’m able to feel the baby moving more often which is still so surreal.

I’ve definitely been feeling less sick or at least I’m managing it anyway. I’ll wake up, have one or two slices of toast with marmite and then I’m fine until lunch time when I start to feel a bit of nausea and have to get my lunch ASAP! It’s been great not having to run off to the toilet every morning, although I haven’t completely said goodbye to unexpected sickness.

I’ve also been managing my hip pain. I’ve been picking up P2 less, sitting down when I can and watching my posture. I haven’t ditched the heels and I most likely won’t but I rarely get hip pain now unless I sit or lay in a funny position. Today, though I have, hubby went out for an appointment and I rushed about doing lots of housework to surprise him. I’m now in quite a lot of pain and feeling sorry for myself.

My blood pressure has been quite low. It was 80/50 at my last midwife appointment then it was 100/60 when we had the scan. Apparently, it’s nothing too much to worry about as I’m small and because I don’t get dizzy from it my body is most likely used to it. Odd??

At the consultant appointment after the scan we discussed Group B Strep. This was something that I was found out to have in the late stages of my pregnancy with P2 and I was given antibiotics during labour. Luckily, both of us were unharmed and unaffected by it. I assumed that this time round I’d be given the antibiotics as a precaution but apparently I won’t be having them unless I practically beg for them anyway. They won’t test me for it either but I’ve bought a home kit anyway.

I was reassured that because P2 was absolutely fine when they knew I was a carrier of GBS that means they are quite happy to let me be antibiotic free this time round. If it had been another story, P2 became very unwell after birth etc, then the situation would be different and I’d be given the antibiotics. This has worried me a little as I was given them and she was fine, but would it have been the same if I hadn’t been given them?!

Wow this weeks pregnancy diaries seems to have gone on forever. I’ve just had a lot to think about I suppose.

Share
Previous “Moving into a big girls bed!”
Next “That locket was very precious to my Nan”