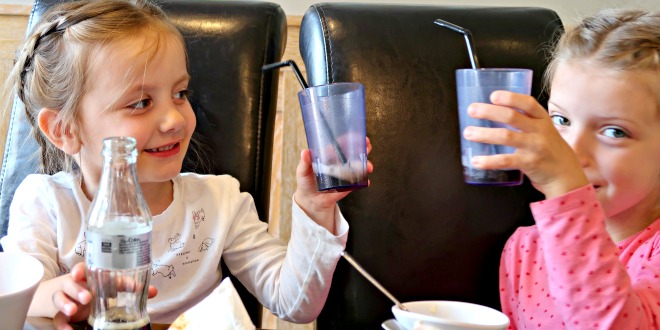 Now we are a family of five, dining out is quite a rare experience for us. Hubby and I tend to binge on restaurant meals when we are child free but taking the kids usually ends up with our meal costing a fortune and being super stressful. Last week we were invited by BritMums to head out for a family meal at Prezzo and try out their new La Famiglia menu. We decided to book a table online instead of chancing it and so we chose a Friday at 12pm when my Grandad was over. I haven’t actually had a meal at Prezzo before, any Prezzo not just our local, so it made the experience even more exciting. Prezzo Sevenoaks is really interestingly decorated, it feels bright but also super cosy. We were actually the first in the restaurant at 12pm but it soon started to get quite busy. The staff were super friendly when we were greeted and sat down. We had a little section all to ourselves, most likely because there was quite a few of us. Three adults and three children. The girls were given their menus that doubled up as a colouring and activity sheet. The crayons were in cute metal containers so super child friendly if the kids decided to throw them off the table like we have had to deal with once before. Drinks are not included in the La Famiglia menu, however they are really cheap for kids and they were also given in plastic cups. So the idea behind the La Famiglia menu is that there is one dish to be shared around the family. The starter is garlic bread with or without mozzarella, then the mains is a pasta sharing dish and the choices are; Penne Arrabiata, Spaghetti Bolognese, Spaghetti Carbonara or Penne Alla Rusticana. You can also get a side dish too which is a choice of Fries, Truffle Oil Infused Fries, Mixed Salad or Rocket Salad. The dessert is either ice cream, gelato or sorbet. As I had invited my Grandad to join us for our meal, I was really concerned that the sharing dish would not feed us all as it is designed for up to four people. But I could not have been more wrong. We were served with two giant garlic breads and a huge dish of Spaghetti Bolognese. We managed to serve out reasonable portions for all six of us and the bowl still barely looked touched. The food was delicious. Once the adults had a second helping along with P2 who was scoffing it down with delight, we moved on to the desserts. The girls had chosen to have ice cream and then the adults shared a bowl too. It was one scoop of really good quality ice cream. You know the little black bits you find in posh ice cream, it was that type of ice cream and was so scrumptious.  The one scoop was just the perfect sweet ending. Our meal at Prezzo Sevenoaks went so smoothly. I think I spent most of it going to and from the toilets (which I’m pleased to report are very clean and tidy) with our potty training toddler. It felt much more calm and relaxed than a typical restaurant meal. We were eating food we probably would cook at home, only without the time, effort and cleaning up.

I am still in utter awe at the fact we managed to feed one fussy eater, one that will eat everything and the other who wants to sit on my lap, plus three adults with no dramas. By the end of it we still had some time for a little walk and a play in the local park. The La Famiglia menu costs £30 which is a brilliant bargain and we will definitely be heading back again. Take a look at my video below of our dining experience!

Disclosure: This post is an entry for the BritMums #PrezzoLaFamiglia Challenge, sponsored by Prezzo.
Share
Previous A Fun Free Activity This Summer
Next My Money Saving Diary Challenge

One of our favourite travel destinations on this planet is the Isle Of Wight. It …