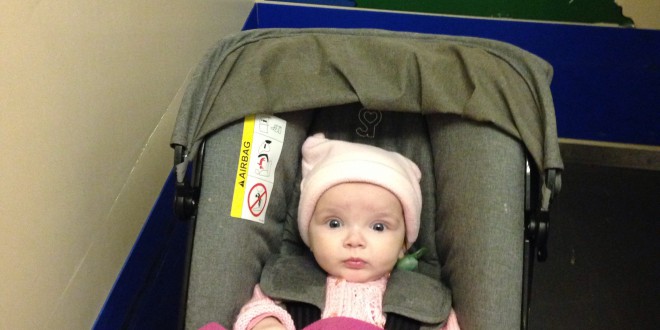 I was up early this morning after being woken up from my dream about my Nan by P1 upsetting P2. It was 6am and the house was still pretty dark. The early morning was ok this time as its been a busy day. Today was the day for P3s tongue-tie to be looked at and hopefully snipped.

We’d been referred to a different hospital. A private one. It took an hour to get there along really thin rounds covered in trees. The view and countryside around us was absolutely breathtaking. The hospital was literally in the middle of nowhere, so much so I had no signal on my phone! Nightmare for a blogger. I’d been pretty calm about the situation as I knew 100% we were making the right decision to have it snipped but I suddenly felt really nervous as we approached and got out of the car. It was a private hospital and you could certainly tell. The entrance wasn’t at all like a normal hospital. It was homely and old fashioned, grand looking! The lift was decorated with children’s stickers and the corridor leading to the children’s room was also really pretty and inviting. Hospitals can be a scary environment for children. The corridor of the ward was amazing. Old fashioned and a bit dated but the door frames were all painted bright colours. The nurse greeted us and we explained a bit of background to her. She said I should ask the doctor to have my tongue snipped at the same time. I certainly wasn’t prepared for that! We were shown to the playroom which makes as a waiting room. I was astounded. It was fully equipped with all sorts of toys, games and drawing materials. P2 was in her element and the waiting was made easier for her.

After about 20minutes we were shown to the doctors room. He talked through the procedure with us, asked me to sign a consent form that we understood the risks (bleeding – that’s all), hubby and P2 left the room and it began.

Firstly he checked her tongue tie by placing his fingers either side of it. He agreed, he said the tie was going through her tongue… Whatever that means… And she’d need a small snip to release the tight bit of tie. He rubbed some numbing gel, which apparently tastes quite sweet and works like bonjela teething gel. He then placed his fingers either side and snipped. Done. I was expecting blood to pour out of her mouth like when P1 bit her tongue. I was expecting screaming. Nothing happened. She wiggled but that’s expected when you have someone’s fingers in your mouth. The procedure itself took seconds. I don’t know why I was so nervous about it.

The doctor has asked that I get referred to him as my tongue-tie is really quite bad but his colleagues are apparently reluctant to do it on adults. I’m quite nervous even though I’ve seen how simple it is but quite excited. P3 seems amazed by her new tongue. She’s sticking it out, touching it and talking more. She even giggled properly for the first time whilst at the hospital!