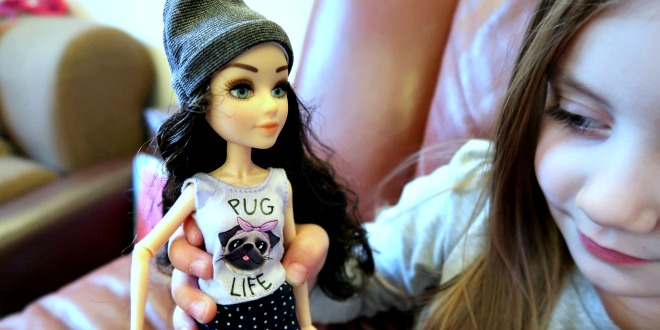 My girls are gradually steering away from the Peppa Pig episodes and moving onto more grown up programmes. We actually never watch live television and rely solely on our Netflix subscription and YouTube to keep the girls entertained. I’ve started to introduce them to more programmes that are less animated and much more life like. One of the Ines I’m quite liking at the moment for them is Project Mc2and we were also sent a couple of the new dolls to have a play with. Project Mc2 is a Netflix Original series following six teen girls who are on a secret mission. They use science and technology to defeat the bad guys. The Project Mc2 Dolls are there to help girls in the areas of Science, Technology, Engineering, Art and Math (S.T.E.A.M). Each doll character has their own experiments which explore the different subjects. We had two of the dolls; McKeyla’s Light Bulb and Devon’s Puffy Paint. I first assumed that the dolls would come with all the ingredients and equipment to recreate the experiments but this soon became apparent that it wasn’t the case. You have to buy the ingredients separately which wasn’t clear until you open the box and read the instructions. It would have been easier for the ingredients to have been listed on the back, especially if you were going to gift these dolls like we did to P2 for her birthday. The dolls are actually suitable for ages six years and above. The dolls were easy to get out of their boxes which is always a bonus. We actually had most of the ingredients except glycerine but that’s quite cheap. P2 was really excited about doing an experiment and we started off by having a go at the Light Bulb. You can see the concentration in her face, it’s adorable. The experiments are super simple and despite being for ages six and above, my four year old really enjoyed it. I love that they also have the dolls to play with too.

The Project Mc2 Dolls cost around £30-40 on Amazom which I think is actually really expensive considering they don’t come with the ingredients too. But they are super fun and the dolls really do make smart the new cool.

This is a great way to introduce science into play for girls. The doll itself is a little flimsy but the concept is brilliant!