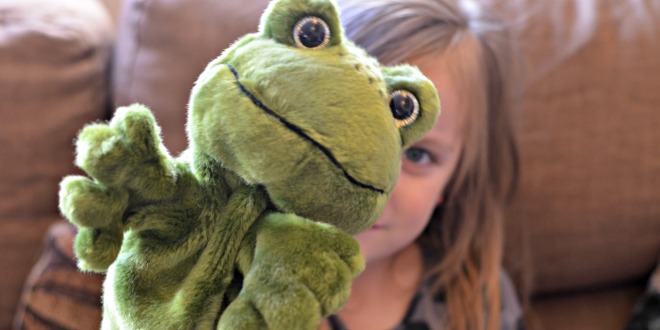 It definitely feels like technology is taking over my world. The word “iPad” is literally grating on me as all three of my girls are obsessed. I have recently felt like the girls are engrossed by technology world, watching endless episodes of Peppa Pig and spending hours playing Minecraft.

I have been searching for new ways to prize those devices away from them and was super intrigued when we were sent some items from The Puppet Company. I was really interested to see if something so simple would actually promote more time away from technology to ignite their imaginations. The first item we were sent was the Frog CarPets. He is part of a collection which is designed to promote family harmony during car journeys. I think it would be great to have a few of them in your car ready to entertain children when they get a bit ratty.

It’s a brilliant idea and the Frog CarPets is made out of good quality material and has a friendly face. P1 and P2 have taken it in turns to entertain P3 with little “shows”. He has even been used to distract tantrums. P3 is actually a little wary of him whereas the other two find him hilarious. It’s such a simple toy that can create and tell many different stories. The Dinosaur Volcano Finger Puppet Play Set was the next thing I popped on my list. I saw it on their website and instantly knew P2 and P3 would love this. They have a little obsession with dinosaurs lately and so I thought this would be perfect. The set comes with three little dinosaurs that have elasticated loops on their tummies.

The volcano is made really well with a tough base and hollow volcano. There is plenty of space inside the volcano to store the dinosaurs when they are no longer being played with. P3 absolutely loves this and the fact there are three dinosaurs to play with means that all three of my girls can join in and play together. During our playgroup sessions, P3 enjoys and has started to remember the nursery rhymes section. I saw these Nursery Rhymes Finger Puppets and Book Set. I think this had to be my most anticipated new toy. So the little set comes with six finger puppets and a book.

The finger puppets quite obviously related to the nursery rhymes which are inside the book. I have really enjoyed bringing those well known rhymes to life for P3 and seeing her little face light up too. I think this would make a brilliant present for any aged child.

Actually, I’ve been pretty impressed overall. I definitely don’t think the girls are ready to put down their technology toys for too long. But these puppets that arrived in the post from The Puppet Company have really helped to give the girls some imagination time. It’s free play and a lot of fun too. We always have them to hand. What’s even better is that they are really affordable toys!

User Rating: Be the first one !
Share
Previous How My Camera Has Changed The Way I Blog
Next Special Needs Diary #10 – An Update