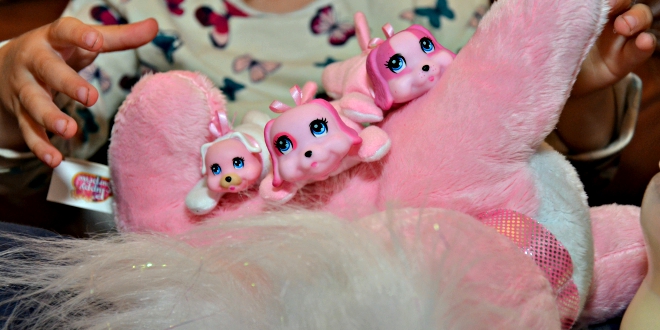 Since the TV advert came on our screens for Puppy Surprise P2 has been begging us for it each day. We had told her she had to wait for Christmas but when we were offered the chance of reviewing one I couldn’t say no. Especially when her big sister came back from her holiday with the Kitty Surprise which was a real tease. Puppy Surprise is a cuddly dog that has puppies inside her tummy. The surprise is that you can guarantee the amount of puppies the Mummy dog has inside her pouch, it could be 3, 4 or 5 and the puppies also could vary, girl or boy, awake or sleeping, there’s even a runt of the litter (a smaller puppy). There are also three Mummy dogs to collect. When P2 saw the Puppy Surprise her face lit up. She was so incredibly grateful saying “thank you Mummy” over and over again. She’s always so thankful of gifts which makes it worth so much more. P2 was excited as she opened up the pouch to find three little puppies, one was actually the runt which P1 was rather excited about. She got three girl puppies which I thought was very cute and such a coincident. At first I was a little annoyed that you couldn’t specifically pick whether to have 3, 4 or 5 puppies and knew I would have felt cheated if we spent the same amount money and there were less rather than more of the toy. But seeing P2s face as she peaked inside the Mummy dogs pouch made me realise that for kids, that’s what it is all about, the surprise. P1 has actually got 5 kittens from her Kitty Surprise, 4 girls and a boy, so that is also super cute! The Puppy Surprise costs just £24.99 which I think is quite a good price. P2 goes to bed every night with Zoey (her Mummy dog) and her puppies, we’ve even taken her to Gymboree and the park various times. The only downside I’d have is that the velcro bit needs to be slightly wider on the pouch as it doesn’t close tightly which frustrates both P1 and P2.

*This is a review post. The product or place was provided free of charge, however, all opinions and photos remain my own*