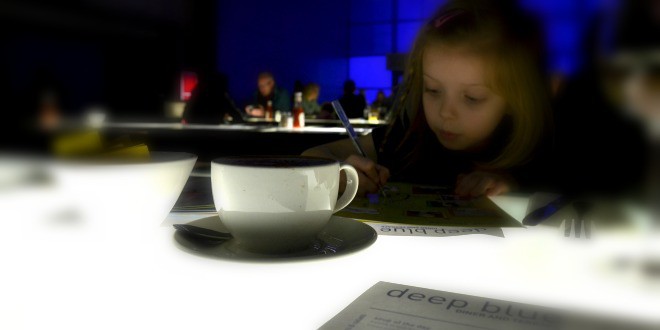 Weetabix have launched a new strawberry flavoured Weetabix for Red Nose Day. I’m sure you’ve seen the little Red Noses plastered over the packaging of the popular Weetabix products as part of their “Pick Your Nose” campaign. For every pack sold there will be a 5p donation made to Comic Relief, plus there’s prizes to be won!! There is a total of 9 experiences to be won every week plus 100s of other prizes up for grabs. The 9 main experiences include; a visit to your nearest planetarium, zoo, science museum, the National Space Centre, aquarium, a chance to witness some wacky experiments, an indoor skydive experience, 3 months worth of karate lessons and a mystery prize! On Sunday we got to experience one of the prizes, the Nosebot! Our ‘prize’ was a trip to The London Science Museum.

The prize includes entry to your nearest Science Museum, a return ticket from a UK Mainline Rail Station and return transport from a UK Mainline station to the museum for one adult and one child. This was the perfect opportunity to spend some quality time just P1 and me. It’s been a very long time since it’s been just her and me. It does feel like she gets shoved to the side a lot with the other two being so demanding. I did decide to invite my Grandad along as I wanted to spend some time with him too. We agreed to meet in London. We woke up early as I wanted to do P1s hair in a special way, which clearly dropped out before we’d even got on the train.

Our train journey was quite simple despite there being a few disruptions, it didn’t effect us, just three stops. Obviously, as it was treat day P1 indulged in mini marsh mellows and we played eye-spy. When we arrived at London Charing Cross we were early. Grandad wasn’t there yet and it was too early for the taxi transport. We may have cheekily popped into Burger King for some chips… at not even 10am!! I’m thankful that we had a taxi ride. It was exciting for P1 and we drove so close to Buckingham Palace! The museum wasn’t at all busy which made the whole experience so much more enjoyable. P1 was asking my Grandad lots of different questions about the various exhibits which was wonderful. It made me realise just how clever she is getting.

As part of the experience we had the Science Museum “Explorer” ticket which meant that we could enjoy one IMAX film and a ride on the Legend of Apollo 4D, Red Arrows and Typhoon. We were also allowed a Museum Guide Book (P1 got the kids sticker book for her age group).

We experienced the 4D Legend of Apollo first. It was P1s first ever time doing something like this and she was rather nervous. When the seats started to shake she grabbed hold of me and then laughed. She loved it!!

We then went to our pre-booked Under The Sea 3D film at the IMAX which is inside the Science Museum. The screen was huge! I unfortunately can’t quite get the full 3D effect as I don’t have much vision in my right eye, but P1 was trying to bat the bubbles, duck away from the sea snakes and jumped at the cuttle fish attacking its prey. Again, she loved it. I loved watching her so amused too! My Grandad went for a wander by himself during our 3D & 4D experiences as the prize is only for one adult and one child. We met him for our lunch. There was a little queue and to be honest the lighting was awful for photography and filming, and general seeing your dinner and the food was a little dry but it was still so nice to be able to enjoy my meal hot, with both hands and be able to hold a conversation without having to leave the table several times. My Grandad started to flag a bit by about 3pm so we made the decision to go. Our journey home was simple and we did P1s sticker book and played eye spy until the darkness fell. It was a surprisingly tiring day but so enjoyable. It’s made me really think that I need to create some time each month for a day out, whether it’s hubby and P1 or me. It needs to be done.

I want to say a huge thank you to Weetabix for letting us experience one of the prizes up for grabs. It was a truly magical day. Don’t forget to go grab your own strawberry Weetabix for a chance to win 1 of the 9 awesome prizes. I hope you enjoy the little video I created of our day.