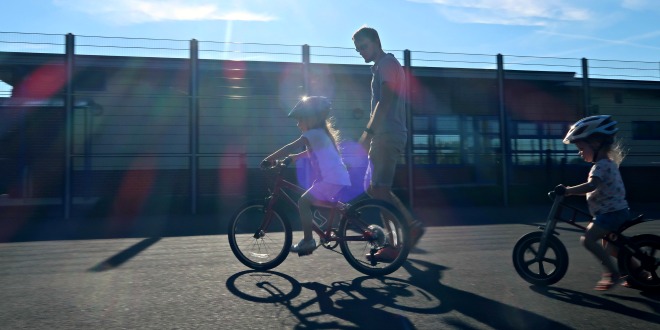 Riding Her Bike For The First Time

Those first moments are so incredible as a parent. It’s so hard to explain but they just give you this warm fuzzy feeling you wish you could bottle and keep forever.

I feel incredibly lucky that I chose to write about my life online. That I chose this way to document it all rather than in scrapbooks. I can look back on so much that has happened over the past five years.

We experienced another parenting first a few weeks ago. Riding a bike for the first time without stabilisers.

You’re probably thinking I’m talking about P1. Sadly P1 just isn’t strong enough and lacks the confidence to even ride her bike with stabilisers at the moment. So even at nearly ten years old, this accomplishment is still a working progress.

It was actually P2 that has learnt to ride her bike. She went from being a complete whizz on her balance bike for well over two years probably nearly three to riding a big bike in just two attempts. We made had made the decision not to buy her a bike with stabilisers. Instead we went for an Isla bike (not sponsored by the way). Hubby had done lots of research and they seemed to be the best in terms of being lightweight and durable. She got her big bike with pedals on her fifth birthday.

P2 was actually a little too small for her bike so it had been put aside for a bit later on. That being right at the beginning of the summer holidays. Hubby helped her to balance a bit on the grass in the garden where she wobbled and was quite nervous but very determined.

Life got in the way a little and the summer holidays seemed chaotic. It wasn’t until nearly the end of August that she hopped back on the bike, this time at a local park that has a flat tennis court she could practice in.

I was expecting tears, refusals or similar but instead she hopped on, pushed those pedals forward and pretty much did it straight away. Hubby gently supported her for the first few times and then gradually he stepped further away.

I felt like crying. When I think of “firsts” that my children do I think it’s heavily focused on first smile, first roll, crawling, walking, eating. The child like older firsts like school, reading, writing and bike riding are things I sort of forget about celebrating.

Watching her ride unaided on a proper bike melted me. P2 has so much determination to perfect the things she’s passionate about and I love that side of her. I could see just how proud she was of herself too.

Since those first wobbly rides, she’s grown in ability and confidence. We’ve practised path riding in preparation for a ride to school, we’ve practiced grassy terrain and even hills too. She loves it! Both Hubby and I are so proud.

How old were you or your children when you rode a bike for the first time without stabilisers?? I’m sure I was much much older than P2 is. She’s five years old. I’m sure I was more like seven or eight.