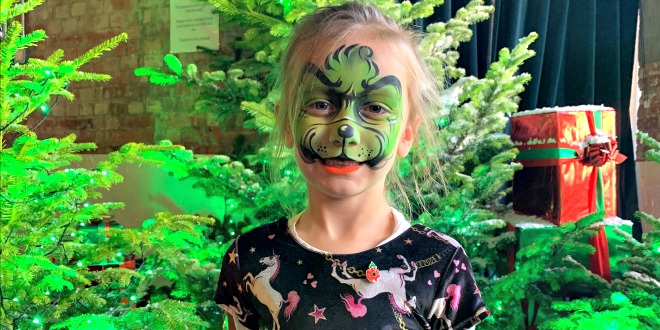 Seeing The Grinch Movie With Friends

On Friday the 9th November the brand new Grinch movie was released to us in the UK. Eva and I were invited by a friend who works for the people behind the creation of The Grinch, to go and watch the film in London. It was technically a work do for them so we were very lucky.

Forgetting my excitement to see the remaking of one of my favourite childhood movies, I was ecstatic to get some one to one time with Eva. Being a mum of three makes it incredibly difficult to spread my time and energy equally between them, in fact it’s near impossible.

We met our friends at the train station and travelled together. This was the first time I’d ever done anything like this – going somewhere with a Mummy friend. I felt super nervous but very pleased that I was getting to experience this.

The venue was absolutely amazing! It was super Christmassy considering it was the very beginning of November which immediately made me look forward to the festive season. There was lots of green in aid of the Grinch himself. I’ve been to many press events but this little event for staff and their family/friends was so good!

We had a little bit of time to demolish some Grinch themed treats like cupcakes and glittery popcorn before we headed into the screening. There was a little bit of a wait before the film started.

I was quite anxious about how the remake would turn out and it was shockingly good! I love how they’ve done it. It’s more child friendly than the original one with the animations being very clever. The storylines were hilarious and Eva was giggling in parts too.

After the film we headed into the foyer for a bit of face painting. Do you like Eva’s Grinch face?

Once we’d finished the fun in the foyer, we decided to grab some lunch at the local McDonald’s. It’s the one place we knew that all the children could eat happily. Which of course they did.

It was actually remembrance day when we headed to London so there were parades and so many service men wandering around. Eva was really interested and happily skipped her way back to the train station.

I had a really lovely day with her and her little school friend. It had come at a time when I really needed it.