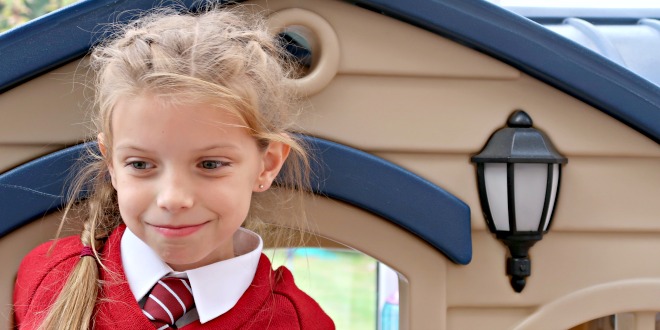 Settling At A New Primary School For My Year 5 Daughter

I wanted to update you much sooner than this but things spiralled into a chaotic blur as we moved Freya into a new school. If you follow me on my Facebook or Instagram you’ll already know that Freya has been at the new school for a while now and in fact Eva has also joined her (that’s another blog post).

I felt extremely nervous approaching Freya and telling her we’d decided to move her into a new school. Freya doesn’t take change very well so we’d always expected it to be a difficult transition but I don’t think I really anticipated her reactions.

At first she was devastated. She cried, I cried, a lot in the few days that she had left at her old school. She begged me to keep her at the old school, accused me of not loving her or caring for her. It was a difficult few days and it made us all questioned the decision we was making.

It’s hard to tell someone so small that your decision was to better her future, better her present actually. That the school was a good thing.

I decided to give her the prospectus booklet with pictures and information on the new school. Freya studied every inch of the pages and ended up knowing more than I did. We bought her uniform and by the end of her last week (which was only a few days after a confirmed start date had been arranged and we broke the news) she actually seemed excited.

Her last day at the old school was so much easier than I ever expected. She didn’t cry. She gathered her locker contents, hugged her friends who were actually rather upset themselves and off we went. It was a shock. I had more tears watching her leave than she did but I felt positive about that. Freya started her new school on a Monday. She looked nervous going in but came out bounding. There was a giant smile beaming across her face. She spoke about new friends and new routines. It was such a relief! After many days of complete trauma, it finally felt worth it.

The first two or three weeks went by in a bit of a blur. We had moments where she asked to go back to her old school. Little niggles she wasn’t happy with like no butter for jacket potatoes or the fact she couldn’t understand her teacher. These worries usually occurred in the mornings.

Hubby and I juggled three different drop offs every morning. It was actually not as hard as we thought, but to make it work we had to leave Freya on the playground much earlier than she should have under the watchful eyes of a few mums I knew. It was working.

After the third week, things started taking a turn for the worst. She would wake and refuse to go to school, she always went in but the tantrums around it were unbearable. Every night she’d cry, once again begging me to take her back because she missed her two friends.

Then one week I felt broken. Freya was broken. She’d stopped seeing any positives in life and I felt so much regret in that moment. Seeing my biggest baby so unhappy was devastating. I spent nights crying. She spent nights crying and the pair of us honestly suffered some depression.

I felt like I was wandering through a cloud. Unable to see any light. I blamed myself for her sadness. I was terrified she’d hate me forever for “ruining her life”. In this week of complete despair, I even asked her old school if there was still space for her in the old class. I needed Freya back and I needed it to happen as soon as possible.

I then arranged a meeting with the new school teachers to check how Freya was settling at school. This meeting was so reassuring. They showed me some lovely work that Freya had been producing, her teachers assured me that she had made some lovely friends and they were really happy with Freya’s progress.

That meeting settled my nerves completely. Freya had actually joined me on the meeting as I wanted her to discuss her feelings too. Which she did. As we walked out of the classroom Freya was excitedly showing me around the school and pointing out different bits. We chatted about the whole situation. I promised to make an effort for her to stay in touch with her old friends.

Then literally a week later from that meeting Eva was offered a place. Since Eva has joined the school Freya has settled so much better. It was like she resented her sister for still having a tie to the school she was desperate to go back to. When we found out about the space for Eva, Freya became really supportive and told her all the new things about the school.

Freya is excited about school now, she’s putting effort into homework and is a totally different person. Freya talks about many different friends and the things they get up to on the playground which never used to happen. Freya has been part of the school choir, taking part in the Harvest Festival, Christmas Carol Concert and getting involved in fun tasks at school like chocolate making.

I want to talk more about this journey as Eva has her own story I want to tell. It’s been a really difficult journey but it’s been a positive one and we are already seeing the rewards for it. The girls are both very happy.