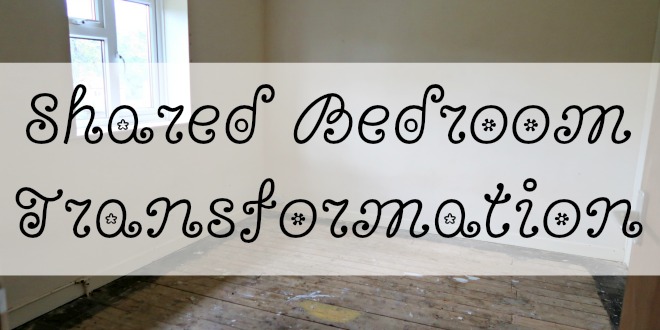 If you saw the last house reveal with the Box Room Tour you will know that one big change for the girls was their bedroom changes. P1 had graduated to her own room leaving P2 and P3 to share still. There’s only 19 months between them so it made sense for it to be this way.

We had big choices to make though with what rooms we would designated to who. Hubby and I were really torn between giving the girls the bigger room to share or the smaller of the two bigger ones. I hope that makes sense. We decided that the smaller one was still plenty big enough and we needed an office space in our room really (that tour will be coming eventually). Like with all of the rooms in our home, floor boards were bare, walls were a yellowy colour and skirting boards all needed some TLC. It was a big job just like the entire house. We had to sand down all of the skirting boards and door frames. They were then painted white along with the ceiling being white too.

Then the fun really began. Like we did with P1, we wanted the girls to take some ownership of their rooms so allowed them to pick the colour. P2, who is boisterous in nature but very pink in her likes, chose the hottest pink possible on the chart. P3 joined her. I managed to persuade them to pick a subtler pink, although deep down loved the hot pink too! P3 helped paint the majority of the walls in their room. She was really blooming good, I’ve never seen a three year old quite so skilful with a decorators paint brush. It really helped to speed up the painting process in this room.

Getting the carpet put down really pulled this room together. The grey compliments it so well and hides spillages too. We also bought an Ikea pink blackout blind with net curtains in the window too. To be honest, their room doesn’t overlook anybody but it just felt more homely to have the nets up there. So there it is. We had to upgrade P3’s bed to the proper single sized bed which meant we needed to lift the slide slightly. Our old Ikea stool came in really handy and was just the right size to have the slide fixed to. The girls love having the slide and it’s always a great hit when we have friends over.

Other than the bed, we didn’t need to buy any new furniture items. Thankfully their room has two built in cupboards, one houses the water tank so we’ve put locks on that. This is useful for our spare pillows, toilet rolls and other bits we never seem to use. The other built in cupboard is a brilliant wardrobe with plenty of space for both the girl’s clothes. However, their underwear and trousers are in a the chest of drawers.

We used to have the pink Ikea unit in our lounge for all of the girls toys. It is now in their little pink bedroom although typically they never seem to look in any of the drawers to actually play with their many toys! The favourite part for me is the fact we could utilise our old sofa in their room. I hate this sofa, I kind of always have, but it was either free or extremely cheap (we got it nearly five years ago!). It’s a sofa bed, and although the room would need a lot of rearranging to actually use it as a bed, it will be perfect for play dates and sleepovers in the future.

That’s not why it’s my favourite thing though, I love snuggling up and reading a story every bedtime. It’s a place to get cosy. I also chill out on here watching my iPad with headphones on, whilst the girls fall asleep. They like the reassurance of me being there and I quite like the quiet “me time” each evening. I’ve also been known to end up there on a rough night with P3 and fall asleep just so I am close. So there we have it. The shared bedroom room reveal. I love their room. I think I’d quite like to fit some pictures or prints to the wall at some point, I’d like shelves too for their Blue Nose teddies they’ve collected but for now it’s a perfect little girls room. I filmed a room tour over on my YouTube channel which you can see below. Make sure to subscribe!