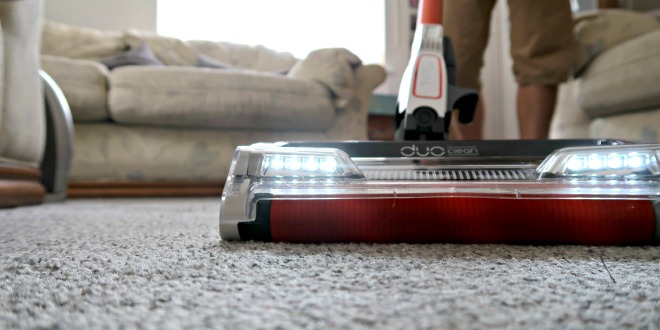 I’m sure I’m not the only one to put my hands up and admit to not being joyous at the thought of household cleaning chores. As I’m sure you’ve guessed from the title I’m specifically talking about hoovering.

We previously had a Henry. We had a strong loyalty to him, that thing sucks up everything! But he was and is a bit of a pain in the backside. Firstly he’s heavy to lug around the house, I’d have to unplug him once or twice just to hoover the entire house and emptying him was annoying. A couple of weeks ago we received a Shark DuoClean Cordless Vacuum Cleaner with Flexology (IF250UK – the twin battery version) to try out at home. Honestly I don’t think I’ve ever seen my husband so excited, especially over a hoover so this energy definitely rubbed on to me.

It arrived in a tall box and we couldn’t wait to get it opened. There seemed to be a lot of different parts to the hoover. At first it felt a little daunting but the hoover itself is all built you just need to fix on the different hoover nozzles depending on your task.

Being a cordless vacuum, it has a charging base that needs to be plugged in. We have the twin battery version which just means it’s supplied with two batteries, the actual hoover can only run one battery at a time. We’ve got ours plugged in continuously as we use the hoover daily now. Both batteries charge at the same time and can be run for 44 minutes ish on the low power setting. I’ll explain in a second. The main vacuum part is the brains of the entire thing. There’s different options you can switch between by a gentle press of the buttons. Obviously, the on button needs to be pressed then the other options light up. There’s carpet and hard floor choices, high power and low power. Having the two different flooring types without having to change the hoover head is what makes the Shark better than others out there. As you can see on the main vacuum head, there are different brush styles inside the unit. The big orange fluffy part spins round, the bristle brush area also spins too grabbing optimum amount of dirt from the surface. It’s a little bit mesmerising. Not only is the Shark Cordless Vacuum super portable, it’s also very flexible. The tubing has the ability to bend or fold down slightly to allow you to hoover underneath a bed or low surface.

On my first go of hoovering with our new Shark I immediately felt the pull. It sort of pulls itself forwards as you hoover which would be great for an older user but also makes the experience so much easier for any user. The base is actually quite heavy in my opinion but I’m not a normal sized adult. There are different nozzles included with the Shark DuoClean Cordless Vacuum Cleaner With Flexology and they also have a very handy bag to keep them contained in. You can remove the main tube to create a great stairs cleaner, you can add the thinner nozzle to reach places like under the fridge or cooker, there’s a cool dusting nozzle too and my favourite little brush for my work top and dining table.

We’ve also loved how if the vacuum detects something untoward going up, like a cloth or duvet cover, then it stops the spinning allowing you to remove the clog and carry on. The main nozzle has lots of clever lights which make hoovering great as you can see what you are doing much easier. The photo above shows a picture of the first time we used the Shark. I’d hoovered the day before with Henry and then went over just my lounge carpet area. I was amazed at the amount of dirt that came up. The carpet didn’t look bad to start with but afterwards it felt fluffy, plumped and looked so much brighter. It was a bit disgusting actually to see the amount of dirt our household accumulates.

We’ve been hoovering daily with the Shark because it’s so easy to manoeuvre, put together, empty and get going. A quick vacuum around the entire house uses just one battery on the full power mode but if you take more time and are more thorough the battery does run out and needs changing once. That’s why it’s great to opt for the twin battery version, or buy yourself a spare. Another great thing about Shark, nearly everything on the unit can be bought separately so if something was to go wrong or break it can be swiftly replaced rather than needing a whole new hoover. The parts are not that expensive either which is good news for my frugal Hubby.

The hoover unit has really easy accessible filters to clean, nearly all parts can be dismantled for cleaning which in turn helps the performance of the hoover. I think a lot of people forget to clean the insides of their hoovers then go out and buy new ones because they think the hoover is rubbish etc.

The Shark DuoClean Cordless Vacuum is brilliantly portable. With the flexology part (the bendy tube) it is not only able to reach low places but can also be stored standing upright and in very small spaces. You may even forget where you’ve put it! We love our Shark vacuum. I have no idea how we were not aware of them sooner. The quality, the performance and the overall ease of use is just amazing! Hoovering the house is no longer a huge chore, in fact it can be quite fun with the lights and self pulling head. I adore the feel of the freshly vacuumed carpet the best.

This model retails at £379.99. I have created a little review video of our Shark for you to see. There’s some great clips of it in action. I hope you enjoy.

Disclosure: This is a collaborative post.
Share
Previous You Are Never Too Young To Protect Your Child’s Dreams
Next Our Scrapbook Summer Holidays 2018 – Week 3