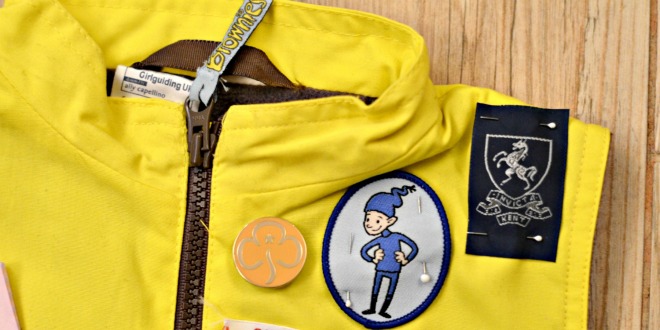 I popped P1s name on the waiting list for our local Rainbows group when we moved over to Sevenoaks. Over two years ago now. Just before Christmas we had confirmation that she had a place. Then a few weeks later we were contacted about a place in the Brownies group. As P1 is now 7 years old she was in between both groups, Rainbows (5-7yrs) and Brownies (7-10years). We decided to go to Brownies so that she was with children a little older as she has been struggling with acting her age lately. This weekend we suddenly remembered that P1 had to make her Brownie promise and be initiated into the group. She needed to know the Brownie Guide Law and her promise for Monday. As usual, we hadn’t even looked at it. So all day Saturday and Sunday was spent drumming the words into her. Finishing the little flower diagram and even printing her out a copy to practice with. We were invited in early to watch her little ceremony. I felt totally nervous for her. She’s the tiniest of the group and looked so nervous but we were pleasantly surprised. She answered the questions given to her. She said she wanted to be a Brownie because it was just for girls. Then she said her promise, loud and with just one little hint from the Brown Owl. She was given her special Girl Guiding Badge and her Brownie ones. I now have the task to sew them all to her body warmer. I wanted to buy her a sash but apparently that’s not the in thing these days. I am so proud and so excited for her new adventure. She’s already so excited about the different badges she is going to earn. I remember going to Guides and had a lovely time.