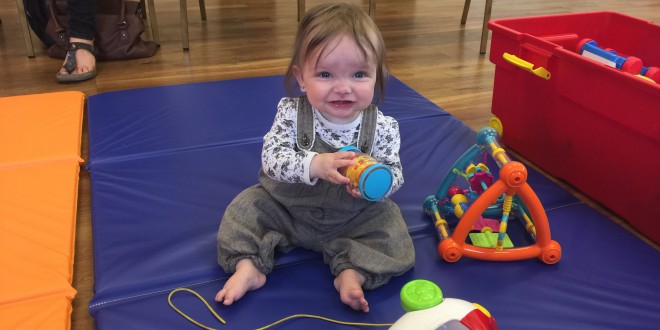 P3 is crawling. Well not particularly getting from A to B but she’s certainly getting there. This development has happened earlier than both her sisters. P1 crawled for the first time around her birthday and P2 crawled at 9 months 2 days old. P3 is 8 months 2 weeks old.

I don’t remember the ins and outs of P1s crawling days but P2 practically woke up one morning on her hands and knees. It’s been a much more gradual learning curve for P3. She started by being able to sit unaided. She then started leaning forwards onto her hands and rocking slightly. She’d flip herself from her back to front and lift her head with her hands. She became much stronger and was able to push herself backwards with her arms and short of slide around little areas not really moving very much as she’d always back into something and get stuck. It then moved from a rocking or her laying on her front to being able to back up enough to sit herself up on to her bottom again. That milestone made me jump for joy. “Hubby look!” “Look at the baby” I think it was only really me that got excited, P1 and P2 looked at me like I was an alien to be excited about P3 sitting herself back up from laying down.

The ability to go from sort of bum shuffling in a small area to actually moving bigger distances did happen overnight though. She’s not on her hands and knees just yet. Her confidence is in moving her hands forward in a sitting position and pushing one leg to make her other sitting one slide forward slightly. She’ll then sit up again and do it all over again to get where she wants. It’s not an A to B thing yet but more of a “let’s get the things around me” situation.

We have just four days until BritMums Live and I’m hoping she doesn’t master the art of being speedy Gonzales in that time.

When did your child/children learn to crawl?