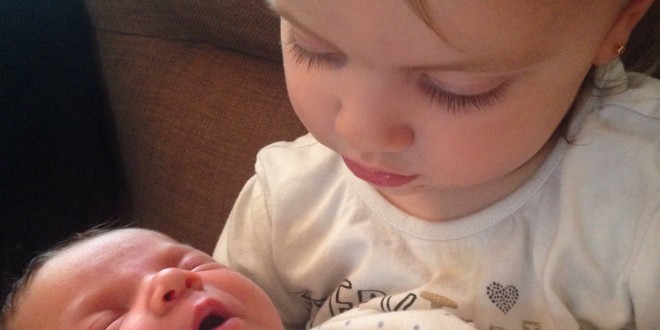 When I was pregnant we had many conversations about having a new baby with both P1 and P2. Obviously P2 had no idea what we were talking about apart from the fact we kept pointing to my belly and saying there was a baby in there. We never had any worries about P1 adjusting, she had a struggle when P2 arrived but we naturally thought she’d be used to having a baby. P2 was the one we were concerned about. She’s very dependent on me, very attached and doesn’t sleep.

It turns out that our problems are lying with the daughter that understands what’s happening, understands that the baby needs a lot of attention and has experience! P1 has been an absolute nightmare, even for hubby before we’d got home with P3. She’s being defiant, rude, hyper and completely in your face all the time.

Whereas P2 has been a dream. She’s gentle and helps me to get nappies or wipes, she strokes her baby sister when she’s crying during a nappy change and sat for 20minutes yesterday with her on a pillow on her lap. She’s doting. I’m not saying that she doesn’t feel slightly put aside by the new arrival, especially at bedtime, but she’s certainly taking it in her stride. I’m so proud. Even during the night she’s behaving, she’ll stay in her bedroom and go to sleep without a fuss. Even P3s crying has stopped disturbing her now.

During the day, once P1 is at school, things are peaceful. P3 sleeps most the day at the moment and P2 gets to play with hubby or me. But as soon as P1 wakes up, or comes home from school, all hell breaks lose. She’s just not listening or she’ll answer back, or make up excuses as to why she can’t wear socks or eat her breakfast. She’s being rather rough with both P2 and P3. She’s jumping all over me when I’m trying to breastfeed. Last night, at bedtime, she managed to climb inside her duvet covers… Yup inside… And get stuck. Causing an already muddled up bedtime to be even longer and disrupted.

By the time P1 and P2 are asleep, hubby and I are not sure whether to laugh or cry at the events of the day. We’re exhausted and it isn’t from sleepless night, it’s from the constant battle with P1!

Share
Previous “I’d forgotten how painful after-birth pains were”
Next “My boobies are the size of my baby’s head!”