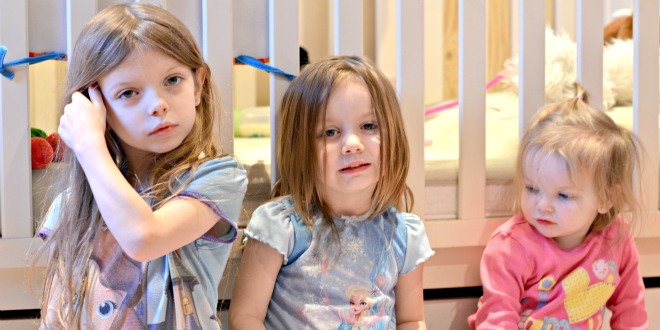 Literally just last night we entered a new phase in their sibling journey, sharing a room together. Ok, P1 and P2 have shared for about two years now and that has gone so well but yesterday we swapped the rooms around and now all three girls are sharing one bedroom. One bit of space.

In an ideal world, P1 would have her own room, her grown up space and the other two would share being closer in age but for now, I was desperate for some space from being their mum I guess. By putting them all in one room it means I have a little bedroom all to myself (well obviously shared with hubby).

P3 is smacking which has been taught by P2 mainly who has been pushing her baby sister away a lot and snatching toys. I can see P3 watching her big sisters so closely that it scares me. They are definitely her inspiration. She loves them dearly and it’s so sweet to watch her alongside them, attempting to join in with their big girl games. P2 has grown so much in this past month and even in the last week or so where she’s now 3. Her imagination has gone wild and she really adds to the games she plays with her big sister now. Like I said, she’s struggling to accept and find her relationship with P3 but it is getting better. There are times when she’s holding her hand and showing her new things at the playgroups. That melts my heart.

P1 is the leader. Through and through. Her bossiness is incredibly frustrating for me as I really want her to be the responsible one that shows her two sisters how to behave. Being leader helps sometimes and despite being super bossy, both P2 and P3 really enjoy her company the majority of the time. Especially this month.

It’s the first day of the school half term and I captured these photos whilst they were playing in their new shared girls bedroom. They aren’t fantastic but they signal the start of a new adventure for them.