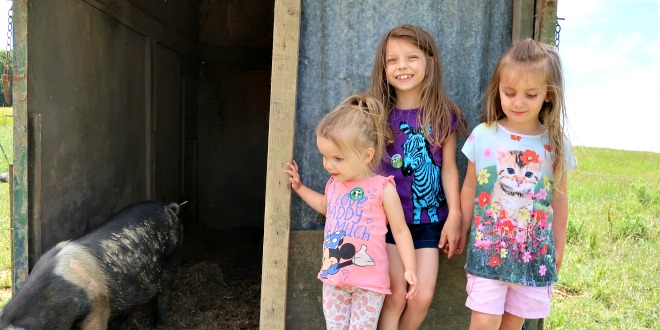 This month has been a bit of a rollercoaster of weather changes hasn’t it! One minute it is warm and bright, the next the clouds open and we end up in a lightening storm with thunder. I’ve been finding it really hard to know what to dress myself in, let alone the girls. Thankfully we’ve had more warmer days despite the rain than it has been cold, and it has allowed us to have many adventures. P1 went to summer school and made a new friend in the year below her. She has really enjoyed collecting the Lego cards and only has a couple to get. There’s been a real shift in her emotions and hormones this month. She’s been enjoying playing Township with all of us because we have all become obsessed. She loved making butter at the Open Farm Sunday. P2 has been really improving with her riding lessons. She has this adorable passion about animals of all shapes and sizes which I love. She loves going to Jump In and is so confident. She has been crying more when she is told off or told not to do something, even if it is a small thing that doesn’t matter too much. She is very excited to go to big school and keeps asking if it is today yet. P3 is becoming more imaginative with her game play. She manages to play on her own and it’s really interesting to listen to her conversations. She has just started to initiate play with other children which has been a huge step. She asks to get the guinea pigs out for cuddles, several times a day. She is still the biggest drama and has meltdowns many, many times a day. She’s exhausting. You know what, they have been playing and getting along really well this month. I’ve noticed that since we changed their beds and sort of lost floor space, they want to spend a lot of time downstairs. They are beginning to look out for each other when we are out. When they are alone they just don’t work well, they all end up acting like lost puppies. P3 especially becomes ultra demanding and you can really tell just how much of a bond they have.