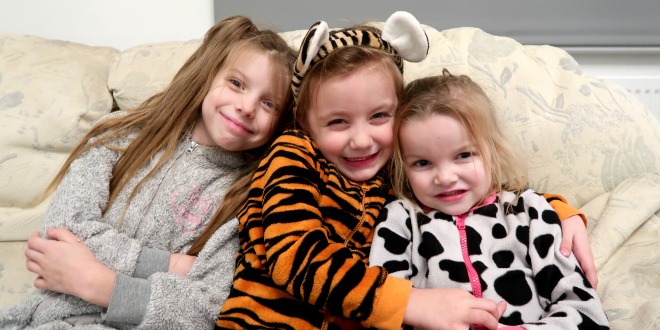 With the weather still pretty pants we have been spending a lot of time indoors at the weekends. I’d love to say we’ve been embracing the colder, wet days but we just haven’t. The girls get miserable when they get cold so it’s not enjoyable to adventure too far away from home at the moment.

We’ve had a bit of an adjustment with home life in the past few weeks where I have been reducing the screen time they get. This is telly and iPad time. My girls are definitely heavily addicted to screen time and seem to have relied on it. Whenever I asked them to play they just couldn’t or wouldn’t. So I made the conscious effort to reduce it.

This has meant they’ve ultimately been forced to bond with each other. It’s been an interesting transition where two will play happily together leaving one by herself. This would switch and change on an hourly basis. They do seem to struggle with being a three, three’s a crowd don’t they say?

P2 is rapidly approaching the same height as her big sister, P1. P3 is becoming a proper little lady with her own stubborn mind. I am so interested to see how they grow month by month and can’t believe we are already on the second one!