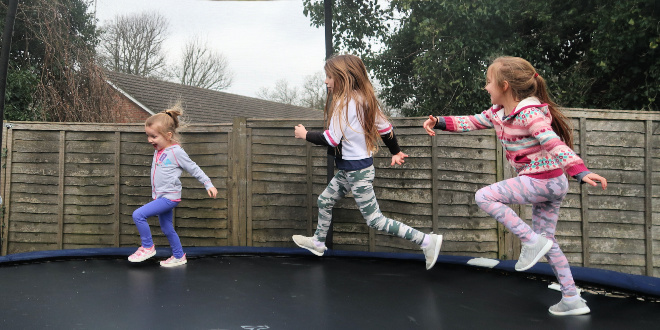 What a month for everyone on Earth, right? I don’t think I ever expected to be writing a sibling post quite like this one. Our lives, everyone’s lives, have quite utterly been tipped upside down and given a bit of a shake in the process of coronavirus hitting.

I truly hope you are all keeping as well as can be during these unprecedented times, I am always available on social media for a chat if you need it! The first week of March was a huge one for Freya. On Monday 2nd we received the news that she’d got a place in the Secondary School she’d been hoping for. I actually didn’t feel concerned as we live within the catchment and we had a faith place too, but Freya did feel some nerves that day. It was so exciting to tell her after school and she’s really happy. We are now left a bit in limbo because transitions days may not happen how they were supposed to.

Obviously, the second half of March has been quite terrible. For any Year 6 child, we were entering the last few months of their Primary School journey. What a realisation and rollercoaster it has been. I’m truly grieving the fact that the very last months have been torn apart. There have been trips quite rightly cancelled over the past few weeks, there will be no Easter service, or last sports day, the end of year School Production won’t go ahead, signing of shirts, the end of year traditional water fight, leavers day, no more photos of her in the uniform, no more early morning Wednesday swims and no exams that she’s worked so hard to achieve and the chance to spend the last day with her friends. I don’t think I’ve ever felt so heartbroken in my entire life.

In a way, this is where Freya’s autism has its positive sides. I’m not entirely sure she’s realised exactly what has been taken and that’s a good thing. Instead, she’s putting her efforts into doing her schoolwork at home and bonding with her sisters. Eva has quite an active lifestyle during school and out of school. With everything that’s been going on, she has had to give up clubs that she adores and most importantly that she is really good at! Her horse riding, gymnastics and Make Believe groups have all been put on hold. At the moment she hasn’t really asked about them which is a nice thing.

She has so much energy and has spent the past few weeks running off steam in our garden. I am pretty grateful for our garden right now. If Eva was properly penned up indoors, I’m not sure she or I would cope too well. She has been my most difficult to get to sit still and focus during “homeschooling”.

I find watching Eva video call her friends the funniest thing. She gets excited about talking but loses interest quickly. She’ll then ask her friends “are you finished with me now?” It’s so funny! I think it’s super important she stays in contact with her classmates as she was desperate to make a best friend connection before the schools shut. Elsa is loving having time at home. She’s a real homebody girl. This is one of my big concerns about the current situation. For anyone who might not know, Elsa has selective mutism. This is an anxiety disorder that affects her ability to speak in certain situations. This is a curable condition, Hubby and I actually attended a course to learn more about how we can help her. I am concerned that by being at home and not being in situations where she can practice her speaking, it will have a negative and prolonged effect on her.

Home learning is quite difficult with Elsa. I’ve learnt quickly that she responds better to arty doing things and videos that teach learning. So a worksheet isn’t the way to get Elsa to practice writing and numbers. I’m also making sure she gets her work done in the mornings when she’s happier to sit with us and learn.

One positive we have found during all of this is that Elsa is trying and eating more. If we let her, she’d snack all day long and right now that’s not possible so we are drumming it into her that she needs to eat her meals whether they are her favourite or not. It seems to be working so far, I’m hoping it’ll have a positive impact on her diet in the future.

Right now they have no choice but to love being in each others company right now. They seem to be bickering a lot during the weekends at the moment rather than during the week. I think there’s less structure and it’s sending them a bit loopy.

I’m finding it interesting seeing their bonds strengthen through this. Freya isn’t shutting herself in her room as often as she used to, she’s playing with her sisters which is something she previously found quite difficult. I think, like a lot of us, Freya is making sacrifices for her sisters and I’m proud of her.

Eva is craving the company of her sisters. If one disappears to the loo or into the garden, she sort of panics and wants to be with them. Elsa and Eva are closer than ever through all of this and it’s nice to be able to let them all play without much interference. As I start this post I wanted to say that we are all absolutely okay. …