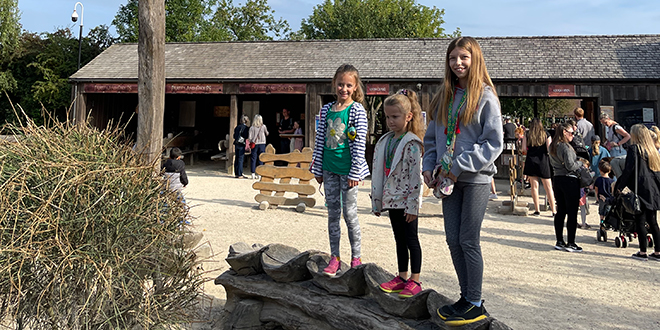 This is the longest and probably the first time I’ve ever missed posting more than one Siblings post. Somehow grief, the summer and life have got away with me and been consuming me once again. But I’m back with September, albeit a little late too!

I hope you all had a brilliant summer! Ours was pretty jam-packed but left us wondering what we’d done. I’m sure at some point I might catch up with some personal blog posts. 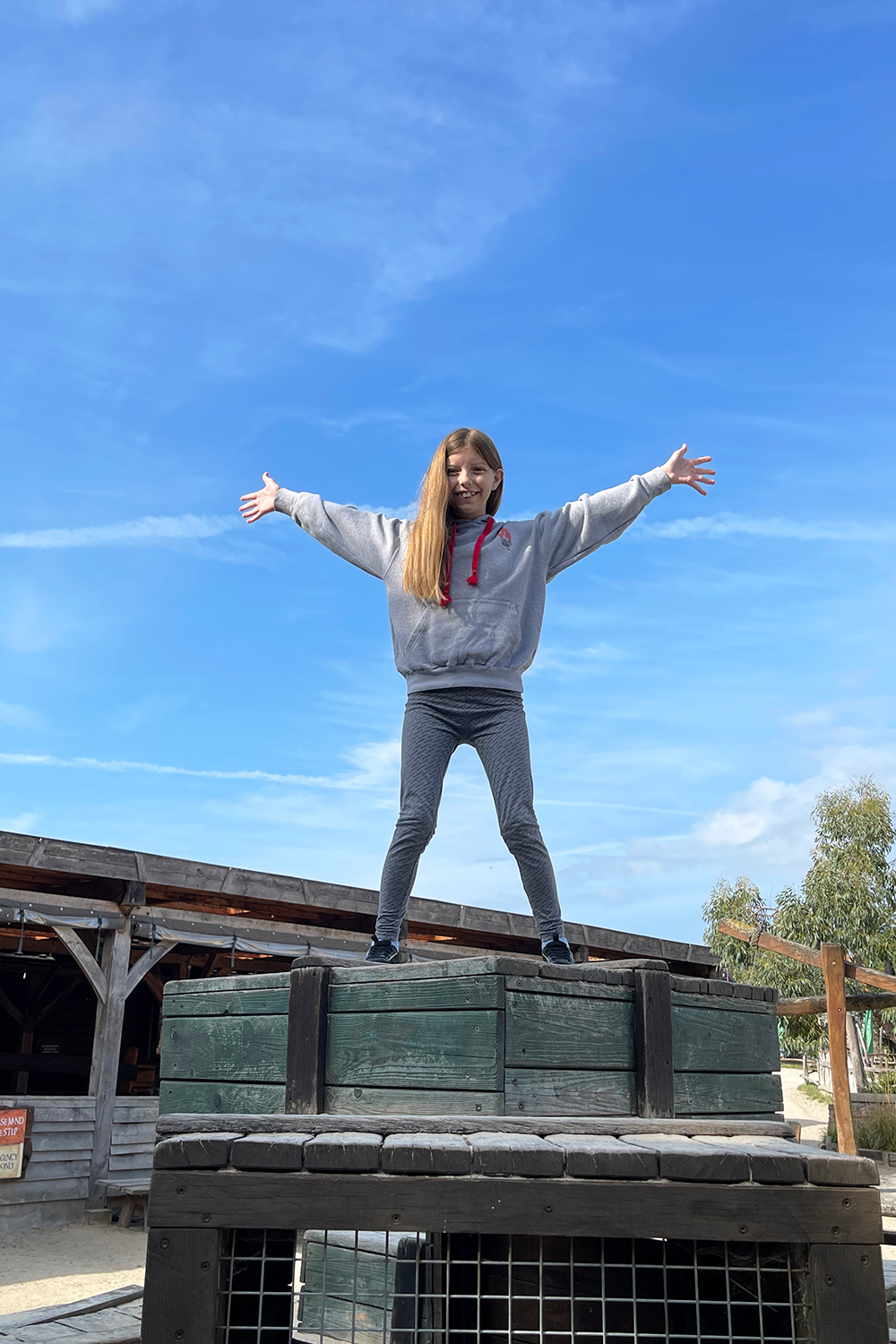 We had a bit of a light bulb moment with Freya at her most recent physio session. She’s been attending physiotherapy ever since she was about 18 months old, and for the past 8 years, she has seen the same physiotherapist – whom we adore.

With the pandemic, it has meant that appointments have been further apart and this most recent one was actually with a different physio. I had two opinions about it – the first being worry that I would have to explain Freya’s hypermobility journey fresh for the different physio, but also excited to get a new set of eyes to take a look at Freya’s wobbly legs.

To our surprise, the new physiotherapist found out something that explained Freya’s struggles. A true revelation or epiphany. Ok, it probably wasn’t that drastic, but basically, Freya’s legs are different lengths. They’re wonky! It explains the inwards turning of her hips, the leaning to one side when she stands and the pains she sometimes feels. We will have a further appointment with a podiatrist to get her some insoles for her shoes to help level out her legs. Exciting!

We are rapidly approaching Freya’s teenage years and you can sense it. It’s an odd feeling to be a parent of a preteen who’s trying desperately to question her identity, the things around her and just generally push back a bit. On a whole though, her behaviour towards her sisters has been much more mature and less of the spontaneous eruptions.

I do still feel like I’m battling against her school a little in terms of receiving support. It seems to be a constant “we don’t want her to feel treated differently by taking her out of class” rather than acknowledging that some support sessions are needed for her mental and social well-being. It will always be a battle though, that sort of goes with the special needs parenting job role! 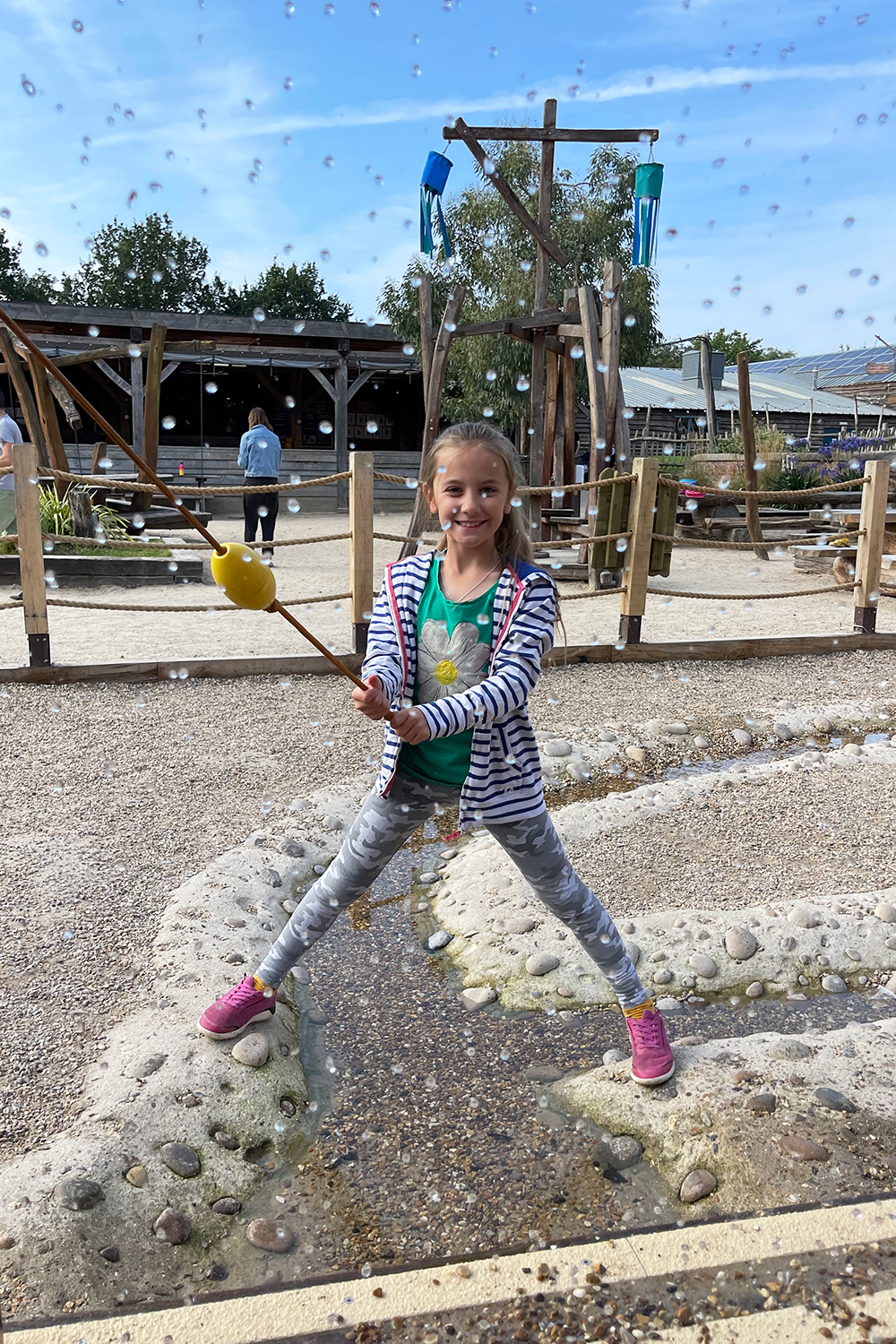 In the later parts of the school holidays, my husband bought a bigger swimming pool for our garden. This gave us some beautiful pool days and the summer with Eva was so much fun. Water has always been a part of Eva’s life where she lacks confidence and has a genuine fear of water on her face. Having the pool in the garden helped Eva’s water confidence grow and she started swimming underwater for the first time. It was truly awesome to witness!

Sadly all the underwater fun caused a bit of a problem for Eva’s ears. She’s always been quite a waxy person like her Dad, but mixed with water, it caused a bit of a blockage, pain and hearing deterioration. Eva has been referred to have some micro suction done so hopefully this will solve the issues.

Eva was super brave at school and stepped forward to pitch in front of her school friends for the Eco Council role. We were incredibly proud of her when she excitedly told us the news that her friends had voted her to be their Eco Council representative. I’m not sure what this involves except the big responsibility of not losing her new shiny badge each day and wash, but hey!

We had a short time with Eva where her emotions and her grief journey seemed stable. Her smile was beginning to grace us again. The only problem we had was that her behaviour seems a bit worrying for us. It was like she was determined to get her sisters in trouble, she was being a bit rude in her answers towards us and she just seemed moody. When we approached it with her, she said it was because of how she was feeling about missing Nanny. We explained that it’s ok to not feel ok, but it’s not ok to be nasty and rude to other people because of it. Talking is better. We are hoping to see Eva change a corner after our chats. 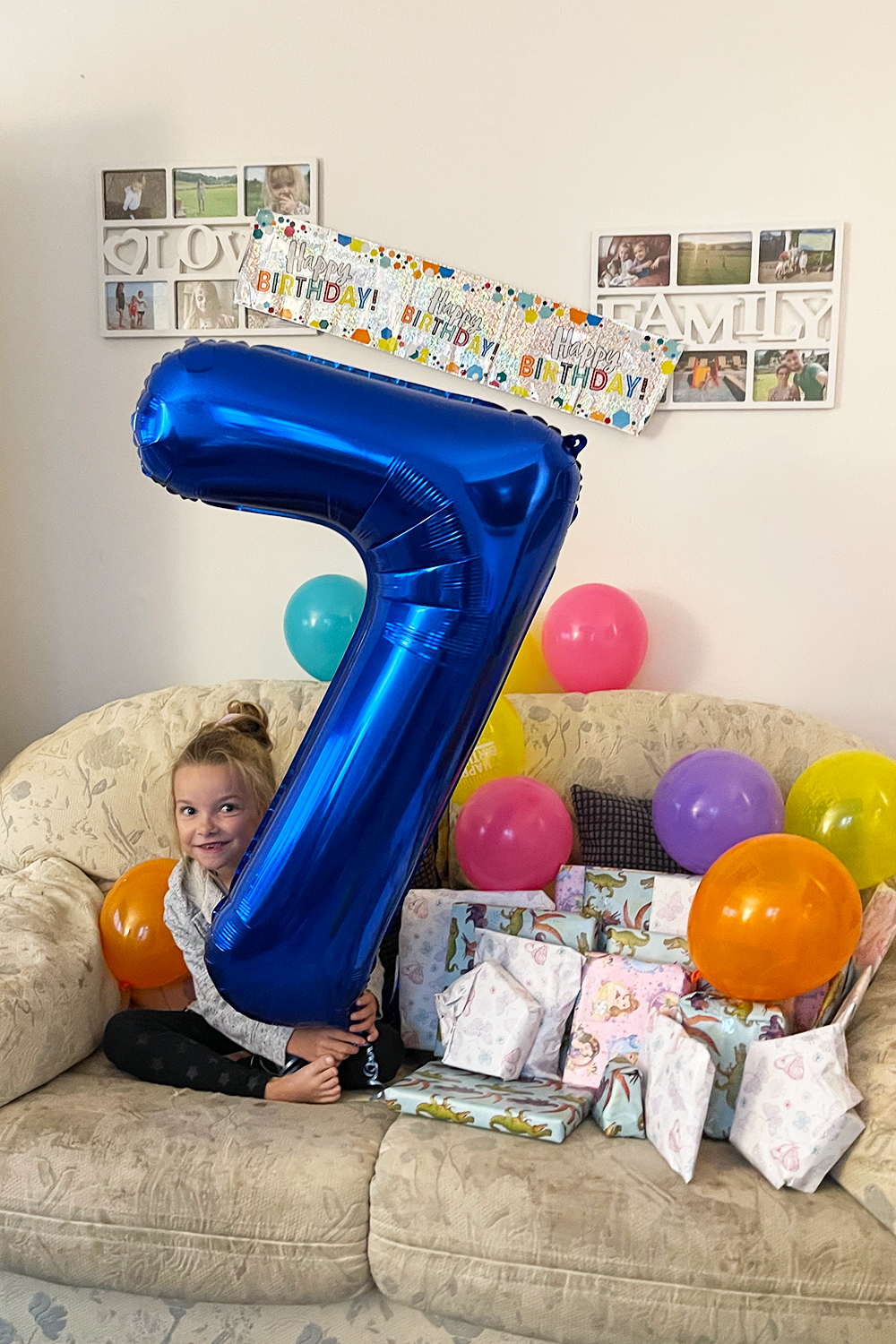 Elsa seems to have suddenly grown up in herself since entering a new school year. Physically, she’s still our baby girl, but she seems more mature in the way she tells us about her school day and expresses how she’s feeling with us. She has started to understand when she feels overwhelmed and can sort of let us know.

You may remember that Elsa was tested for a Growth Hormone Deficiency a few months ago. We had been waiting for what felt like forever to get the results back. These finally came back on my birthday nonetheless. It’s a bit of positive and negative news – Elsa has been diagnosed with a Growth Hormone Deficiency but the good news is that it can be treated. I want to create a video and blog post talking a bit further about it all once we know more but at this moment in time, all we know is that she will be starting Growth Hormone Therapy which involves daily injections. Quite a lot for us to digest but I’m feeling hopeful.

September is always a big month because it’s a birthday month. Elsa turned seven years old. She was incredibly hard to buy for this year, she wanted one thing which was a reborn baby doll but a very specific one. We could not find this special doll anywhere! So instead we found something she adored on her wishlist which was slightly Christmassy – a Playmobil Nativity set. She loved it!

Although Elsa still struggles daily with Selective Mutism, we can see little glimmers of confidence-building for her. She’s started a Gymnastics club with Eva and seems to be joining in and loving it! Usually, she refuses to do clubs so this is a huge improvement. She’s also been doing an Outdoor Learning club with school too that she enjoys. 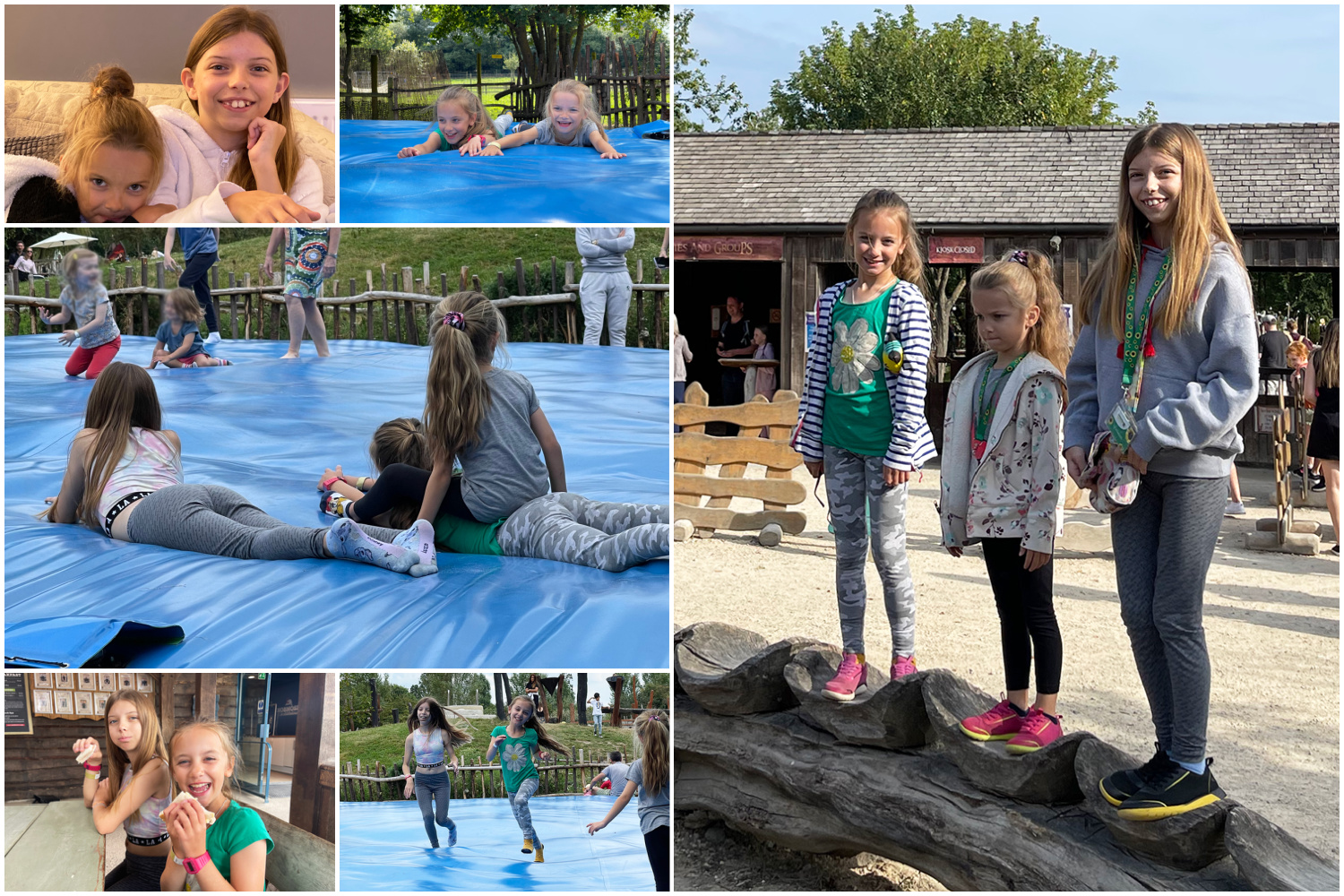 In terms of family time this summer, we’ve had so many beautiful opportunities for my three daughters to bond together. In the summer holidays, all three of them went to a holiday camp, albeit they were in separate groups but it brought them closer together as they discussed the things they’d been doing. We had some family days out and chilled days at home too.

I think I’ve seen a real change in the way Freya interacts with her younger sisters. She’s finally embracing time spent with her sisters and I can see the genuine joy on her face when they share connections. I’ve been working hard to teach Freya the rules of friendships and relationships, how to listen more and try not to dominate situations so much. I’m seeing a positive step forward for her.

Eva has always bounced between her sisters with the very obvious strong bond with Elsa. There’s been a bit of a distance created as she’s struggled with her emotions, this has pushed Freya and Elsa a bit closer together and meant that Eva has felt a bit lonely at times.

I think Elsa is a bit of a ring leader in our trio. She certainly calls the shots and has both her big sisters wrapped around her fingers. She loves nothing more than playing the baby and being looked after and care for by Freya and Eva. It’s amusing to watch. She’s also finding her feet within their relationships and isn’t afraid to wind them up and pull pranks on them. 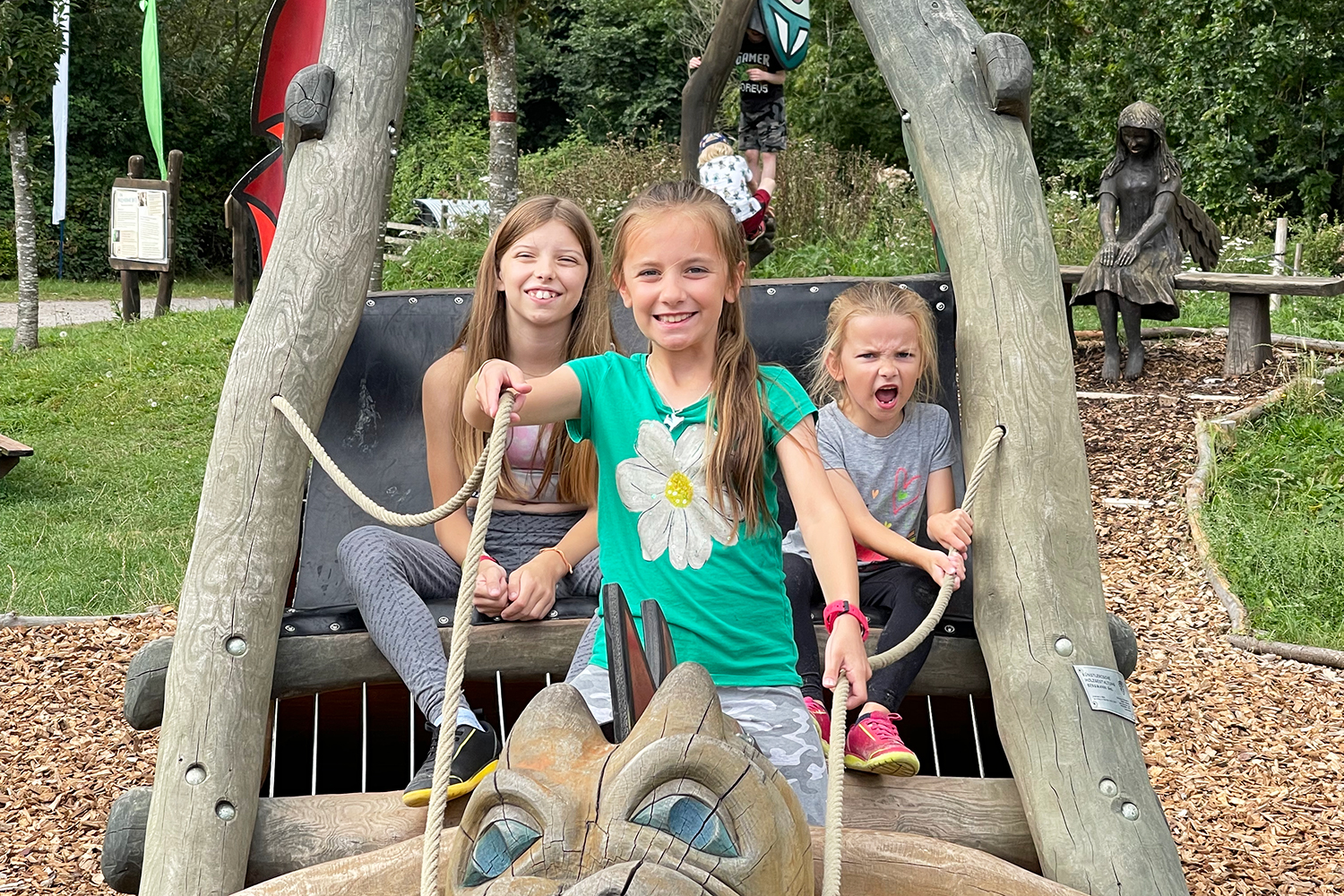