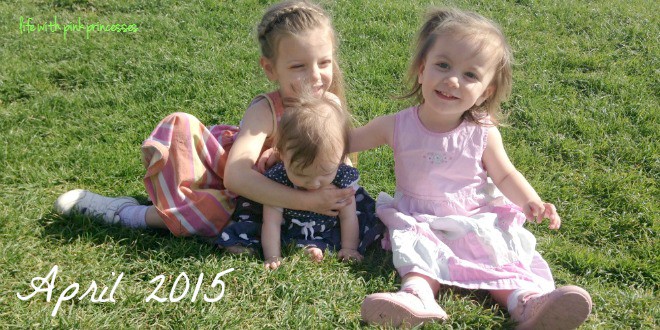 This month has seen a significant change in my set of sisters. Their youngest sister is now sitting, still slightly wobbly, but she’s sitting and that’s what counts. It has meant that P3 is now slightly more interesting to P2 who hasn’t really taken true notice of her until now, suddenly she wants to play with her baby sister rather than help care.

They’ve all spent a lot of time with each other this month with the Easter Holidays and the fact we are doing more things as a family when P1 is not at school. I keep telling them all how lucky they are to have sisters. To have best friends. That they each have responsibilities as a sister.

With P2 vocalising more, she has been able to really play properly with her big sister. They play imaginative, role play games and although more often than not it’s P1 bossing her middle sister around, it is quite magical to witness. On the other hand, they bicker like women and that part of their relationship is awful.

P1, surprisingly, still has a lot to learn about being the biggest sister. Half the time she seems unaware of P2. We had an incident where P2 fell down the toilet and P1 just watched her and then walked away as if nothing was happening rather than helping her before we could get there (Only a few seconds by the way) and it’s slightly worrying.  I want her to watch over her sisters and help them with life’s little dramas just like I hope they will return the favour, but there’s something different about being the BIG sister.

P3 is wanting to join in with everything. She’s even began to “shout” and try to communicate with her sisters. Her favourite past time is pulling their hair of course or chewing a toy she managed to grab. I think she’ll get away with a lot!

My sibling photo for April was captured on my iPhone so they aren’t the best, but they were actually taken today when we visited family back in Essex and took the girls to the park. The weather has been delicious and P3 has been experiencing the feel of grass between her toes and watching her sisters play. Learning. Of course, typically I couldn’t get them all facing the same way at the same time. P1 loves to wiggle around and look in every other directions or generally look really grumpy. P2 is a bit cheeky in front of the camera, she’ll give a huge cheesy smile or run away. And P3… well she’s surprisingly easy to photograph when there isn’t the distractions of a Grandad and other children in the park!