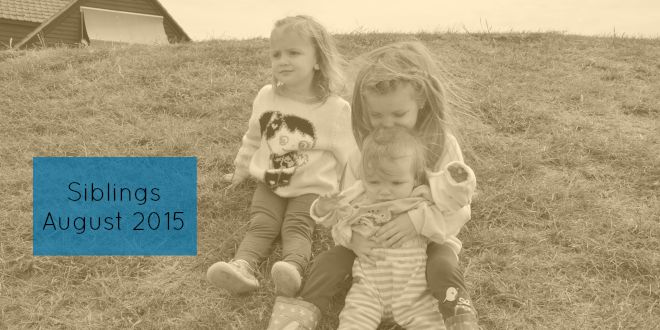 For all of this time I have been worrying about the relationships forming between my Siblings. Terrified they would hate each other forever. I’ve always wanted them to be the best of friends with visions of them happily choosing to go shopping or the cinema with each other. That’s what I want for them. Someone to always turn to. Best friends.

They have never really had that relationship. Most of the naughtiness and telling off that P1 gets is purely because of the way she treats P2. Those two fight like no other, not a fisty cuff type of fight but snatching, arguing and screaming at each other. Real girl behaviour. Whereas P3 just sits and watches, taking it all in and I’m sure she’s waiting for the moment to leap into action and join in. Especially as I’ve seen some survival mode behaviour with her as she’s getting older, she’ll grab the toys and hug them close spinning around in a circle saying “nnnnno!”

This month I have finally realised that actually, deep down, these three daughters of mine are the best of friends. I’ve been watching them closely. The way they interact. It’s something that’s always nice about school holidays and being a stay at home mum. The girls are able to come together and spend 24/7 with each other and with me. Plenty of time for arguments and bonding. The past few weeks have seen a huge change in the way they communicate with each other, behave with each other and live alongside each other. Finally, they are getting on more than they aren’t.

What I have noticed, especially this past month, although I think the signs have always been there. My three daughters are only at their best, functioning at their best, when they are together and a little trio. P2 and P3 are definitely used to being just them two as that’s what happens on a normal week day but take P1 and P2 away, leaving just P3 and things change drastically.

Each month, P1 and P2 have one Saturday-Sunday with my Mum in Essex. P3 isn’t quite old enough to join them so she’s left alone which you’d think would be a nice break, but instead it’s absolute hell and P3 becomes enough voices and demands to make up for the other two missing. The same has happened in the past day when P1 has been on holiday leaving just P2 and P3, P2 is lost without her big sister now that she’s gotten used to having her around all the time.