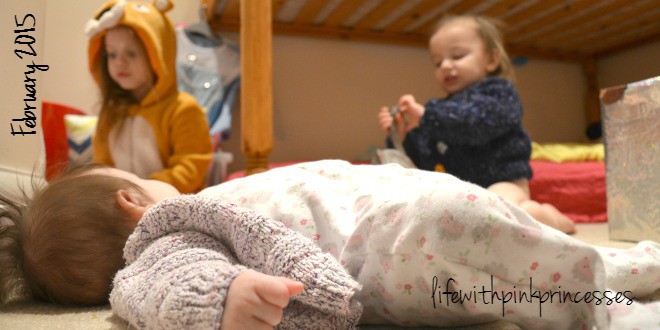 It’s only the second month of our Siblings journey and I’m already struggling to find positions to get the girls in together. I’ve heard the saying “never work with children or animals” and my goodness it’s so true!

We’ve recently changed their bedroom slightly, giving them space to play and move around. Removing the wardrobe seems to have made things much more calmer for them. Although P1 has wanted to enjoy this space alone and gets extremely frustrated when P2 wants to be with her.

After begging to be alone and shutting the door on her little sister, P1 finally gave in and allowed P2 to sit and do some drawing with her. I took it upon myself to take P3 up there too and use the opportunity to capture their natural moments together as sisters. Despite the fact this photo doesn’t truly show their faces, February’s Sibling photo really does capture the three of them in a much more natural way than the staged photo from last month.

P1 adores her baby sister but is and has always been quite reluctant to bond properly with P2. She squabbles continuously and hates the idea of playing with P2. It’s very strange because she’s actually really loving and does help P2 with things too. But it’s very rare that I’ll find them hugging each other out of choice.

P2 is also equally as loving towards her baby sister. She’ll chat and play with her. Help me fetch nappies and milk. P2 is completely obsessed with her big sister. Wherever she is, P2 wants to be. Whatever she does, P2 has to do too. She watches and learns. There’s so many little things that P2 does that I can see she learned from P1. It’s cute although they certainly have a love hate relationship at the moment.

P3, being the baby, is doted upon constantly. As she’s growing I can see her watching her sisters. Smiling at them. Learning. And that’s what you can see from this months photo.