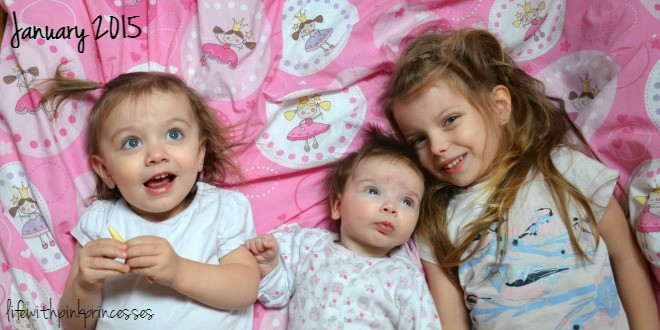 In 2014 I had intentions to join in with as many photo projects that I could. There’s quite a few in the blogging world. I wanted it to help me document our life which was the reason for my blog. It didn’t quite work out as I planned and soon enough we found out we were expecting again.

I then spent each month trawling through everyone else’s siblings photo project feeling excited that soon my two would become three. A completed set of sisters. I decided to start a fresh for 2015. This project is going to really test my photography skills and imagination. Hopefully I’ll grow to learn things about photographing children. It’ll also mean I can watch the three of them grow together and by December I’ll have 12 photos that I can look back on. The fact our house is pretty dull with natural light and the time I have to actually take a photo with P1 during daylight hours is pretty limited, I decided to take the photo in the girls bedroom. They have a window in the ceiling (dormer? Skylight!?) and one in the side so it makes their room the brightest with natural light and therefore the perfect location during these cooler months. However, having said that, the only place I could get them all comfortable together was on top of the high-sleeper bed meaning physically taking the photos was difficult for me as I’m the same height as the bed!

We of course had plenty of out-takes. P1 has a tendency to look in every other direction than the camera, P2 does not stay still and P3 has a short amount of “happy” time. I tried to lay P3 on top of P2 but the photo it produced made it look like P2 was trying to pull P3s head off, so I swapped her onto P1. I have a few nice photos in that angle but it wasn’t perfect.

Laying them down beside each other seems to be the easiest, less awkward looking way of photographing the three of them at this stage. So here is our January photo to kick start our 2015. I love the way P3 is touching both of her big sisters. She spends most of her day completely in awe and watching her sisters, learning from them. I also love how P2 has a slightly cheeky expression on her face, is playing with a crayon and her hair is in her typical style. P1 has been a very doting sister and this photo shows that in the way she’s holding P3s hand, leaning in close to her but it also shows her messy hair which is so natural.

P1 has just turned 6, P2 is 23 months and P3 is 14 weeks, by December I’ll have a nearly 7 year old, nearly 3 year old and a 1 year old! I’m really excited to see them all grow this year and see how their relationship grows with that.