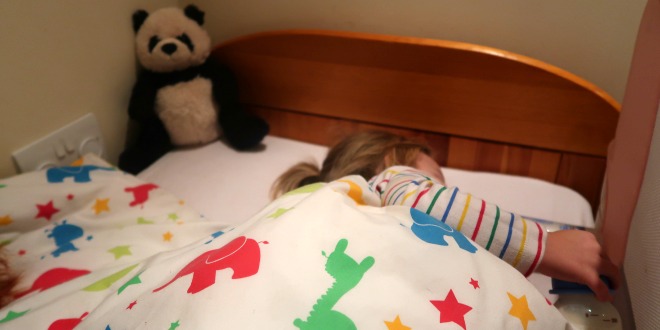 I was teased whilst we were in America. I experienced five days of what my life probably should be like by now. I put the girls to bed and didn’t hear from them until morning. In other words I had four full nights of sleep. I don’t think I really got to feel the benefits though as jet lag kicked in and the girls routines fell to pieces.

We’ve been back for nearly four weeks and our sleep patterns are worse than ever before. Every single time I used to moan about not getting enough sleep and feeling sleep deprived, was an absolute joke compared to the way I feel right this second. And it’s only getting worse by the day. It went from P2 and P3 staying up late and waking early from the jet lag. Then it was the pair of them waking twice each at different times. This is normal for P2 but not P3, she has slept through solidly for over six months. But in the past two weeks we were all hit by a sickness bug followed by a horrendous cold too. This has thrown us all out and I’ve actually forgotten what it feels like to have at least two hours of solid sleep in one go. P3 has been the worst, she’s been waking every 30-60 minutes and sometimes less every single night for about two weeks.

I thought my body had got used to being disrupted during the night time. But I honestly think it’s just been switched to auto pilot and I’m walking around in a bit of a zombie like state not really knowing what’s going on. I am forgetting to hand in letters or permission slips to the school, my blog work is just not getting done because I am falling asleep at my laptop every time I try. I have all these things I need to plan and get ready for Christmas but my body is just not allowing it. It’s actually quite scary the effect that lack of sleep has. I even went out recently leaving our front door wide open. We were extremely lucky to come back with stuff untouched considering we live on a busy main road. But I honestly remember locking it or at least shutting it. I have been known to move the girls when they were little, into our bed and I would wake to find them sleeping peacefully next to me. My recent functionings are just scarier than ever though. I am beginning to wonder if my girls have forgotten what it’s like to sleep and whether I will ever feel normal again with eyeballs that don’t ache and sting by lunch time.

Please, somebody remind me what it’s like to be a normal human being and that this phase is just a phase?