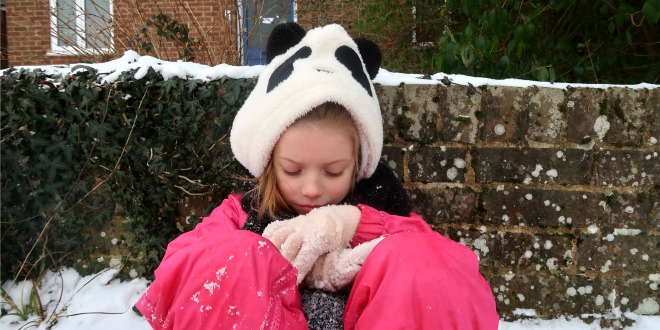 It already feels like that snowy, winter wonderland we had last week was such a long time ago doesn’t it?! I keep looking at my photos wishing I’d taken more. It was just such a beautiful week. However, for us it also was a pretty awful week for P1.

Change effects her hugely as you will know if you’ve followed my updates for a while. I find it hard to describe her behaviour patterns when change happens. It’s like she takes herself to a totally different world and she’s just a shell of who she once was.

Sadly this change had come straight after a really good spell of behaviour. We finally felt like she was with us in our world, she was a joy to be around and fun. Then the snow started to fall and it disrupted our weekly routines of going to school.

She didn’t want to be around us, and wanted to be by herself watching the telly and not joining in with the snowy fun. When she was outside, she was by herself. She was even more unaware of her surroundings and nearly got run over once too. It felt like autism had totally consumed my girl. Kicking all of that aside, we’ve had some really good updates and things going on already this year. Firstly and probably the most exciting for me, is that her paediatrician finally agreed to put her on the waiting list for an Autism Spectrum Disorder Assessment.

This is the result we’ve been fighting for for such a long time. The conflicting school results of questionnaires has made our journey really hard but finally we may get some answers. The downside is that the waiting list to be assessed is somewhere between 12 and 18 months! It’s an even longer way for some “answers” but it’s a positive step forward.

The next thing was that P1’s physiotherapist referred her to have special prescribed shoes (orthopaedic shoes to be precise). These are free on the NHS, gotta love the NHS, and was something we had begun to look into ourselves anyway. The idea is that they will support her ankles and feet to stop her rolling them inwards.

The appointment was fun, she got to tread in soft pink moulding material, she was then handed a huge catalogue of different shoes and was told she could pick whatever she wanted as they would write a letter to the school. We then had about 6 weeks to wait for them to arrive. Here they are in all of their pink, shiny glory! She loves them, I love them and they definitely do not go with the uniform dress code. Honestly, they are so shiny that you can see yourself in them.

We picked to have the velcro option so that she can easily do them up by herself. Inside are separate insoles to support the arch in her feet. The boot is relatively high to support her ankles. They are going to take some getting used to but I really hope they help her. I’m just waiting for her to tell me she’s had some nasty comments from the bully girls in her class.

What do you think? Aren’t they cute…. for NHS shoes!!