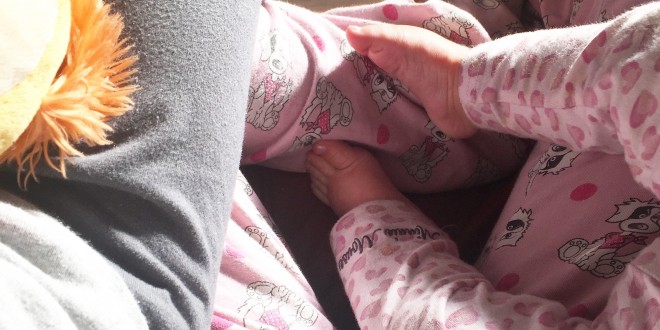 In the past two weeks I have gone from being a mother with disturbed sleep to an extreme sleep deprivated mum. I am beyond the most exhausted I’ve ever felt in my entire life.

P2 has been battling with a nasty cough that seems to be lasting forever which has caused her to wake even more than usual, one night was as bad as nearly every half hour to a hour. If you’ve read this blog for a while you’ll know she’s not a good sleeper anyway but the past few weeks have been torture. She’s back in the habit of asking for milk, and getting it, because quite frankly I have had no energy to fight that battle whilst also attempting to keep P1 and P3 sleeping.

Which leads me on to the other little terror causing me to spend less and less time snuggled in bed as each day passes. P3. Her sleep has always been relatively good in comparison to P2s, waking once when we go to bed and then again around 4-5am, then up for the day at 7. For the past few weeks she’s been suffering with teething problems and now it’s a high temperature from the immunisations she had last week.

I’m spending my entire day meeting the demands of over tired children, battling my own emotions and then spending the whole night running between P2 and P3, stopping off for a short break in bed before doing it all over again every hour or so. I seriously have no idea how much more my body can take of this. I feel myself losing concentration and slurring my words, forgetting things and finding it hard to manage my emotions.

I’d love to know what the long term effect is of disturbed sleep. I wish there was some magic cure or that the girls would just suddenly flip a sleep switch. It’s been nearly three years since I experienced a full, undisturbed night in my own bed.