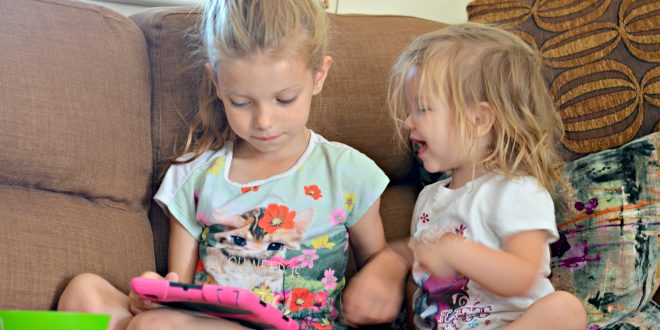 It’s been about a month since I posted a My Sunday Photo. Life has been so incredibly busy and I’ve felt a bit guilty for not actually posting because that was the whole point of taking part. But with not having a car, feeling utterly exhausted for the majority of every day, I just had no motivation to sit and post every Sunday.

But I am back, for now at least. Last night P2 went on a spontaneous sleepover with her Nannie. When they have sleepovers there it’s usually just one at a time because my BiL is also a young child and my girls tend to play up a bit as it’s super exciting to be with their Uncle whom they adore. So this Sunday morning we’ve got just P1 and P3 which is rare.

P1 got herself up and goodness knows what time as she just took herself downstairs to play on the iPad. Then P3 woke at a very late time of 8:15am. Since getting up they have been playing so well together. P1 has been letting P3 help her with a new game she has and it’s just been so cute to watch. P3 adores both her sisters but the past few days P1 has been particularly a favourite and she’s been pretty grown up with her. I will try to remember to post next week’s My Sunday Photo too.