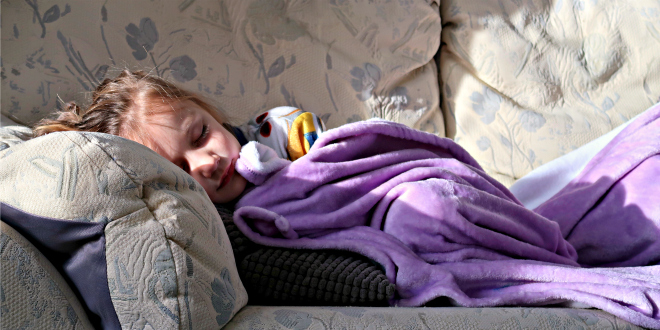 I’ve already failed miserably at this so won’t promise I’ll be joining in every Sunday, but I’ll do my best! This Sunday’s photo is from Wednesday. The previous evening P2 was exhausted. I put it down to the adjustment of back to school. She actually asked to go to bed early and I had P2 and P3 both asleep by 6:30pm, about an hour earlier than usual.

After a horrendous night with P2 and P3, we eventually woke to a very tired P2. She was clearly sleepy but part of me believed it could have just been the broken sleep that she’d experienced. I was tired, everyone was tired. So I sent her off with Hubby to school with P1.

Hubby returned with P2 just after 9am. She’d not been herself on the school run, sleepy and being tearful. The teacher had agreed that she needed to go back home and so she spent the day indoors with us. We had a super lazy day, Hubby went to get a treat McDonald’s for P2 and P3 and we watched film after film.

She barely moved from the sofa and I felt guilty for evening thinking of sending her to school. She was weak, off her food and pale. The kittens livened her up a tiny bit and made her smile, but otherwise it was a chilled sick day for us.