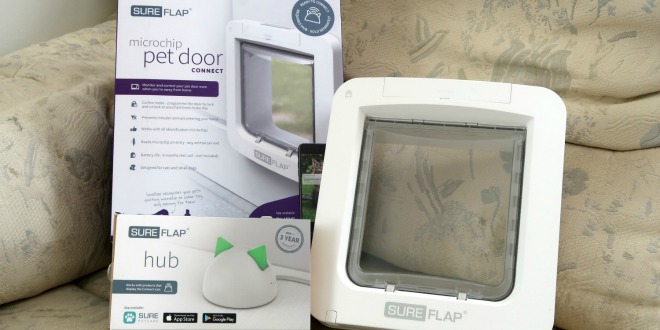 A few months ago one of the two kittens we rescued from the RSPCA went missing. We’ve had them for nearly a year now, over that time they have grown their own personalities and we’ve noticed routines. So when Billy hadn’t returned to meow at the door (we didn’t have a cat flap) for over an hour I knew something was wrong.

I was parenting solo that day. It sounds so pathetic but I was really worried. Long story short, a few fence hopping and climbing through bushes, and about six long stressful hours later… Billy was found rescued and Home. That day was honestly horrific for me and it felt like someone had ripped my heart out. It did give us the push to start researching cat flaps. We had one major box that we needed to tick for our cat flap – other cats. Our new neighbourhood has a lot of cats, we saw at least five in our garden every single day and the thought of having some sort of cat play date was a little daunting. So we needed something that could be microchip activated.

We found the Sure Petcare Microchip Pet Door Connect. Now I kid you not, this pet door can be controlled by an app on your phone. What is this world coming to? As a family we are quite technology based so it was quite exciting to see how this pet door would work for us and our very adored kittens. First of all, the difference between and Pet Door and a Cat Flap in this instance is that the pet door is slightly larger. It can accommodate a small dog (chihuahua) and/or a large cat. Billy and Jake are both quite big at 7 months old so getting the Pet Door seemed to make sense over a cat flap. The Microchip Pet Door Connect costs £119.99 on its own however it cannot be linked to the app, you need to purchase the SureFlap Hub. You can buy these together for £159.98. It’s definitely not a cheap cat flap option but after using it for quite a while now, I have really enjoyed the benefits.

Setting up the Microchip Pet Door Connect is relatively simple. It comes with instructions that are really easy to follow, including picture diagrams too. The actual Pet Door tunnel acts as a template. Hubby had it fitted in our kitchen door within about ten to fifteen minutes, and he’s not naturally skilled with DIY. Once the Pet Door is fitted into the door, with batteries inserted, you need to install the Hub. Ultimately it’s plugged into your internet router and the app, which is downloaded for free, helps you to set up and connect the cat flap with your own cat/s. For the set up you just need to get your cat to be inside the tunnel or near the door of the pet door. It comes with one tag for animals not microchipped, otherwise it scans their unique microchips and stores the details.

It took Billy much longer to figure out how to use the Pet Door. I can imagine it being quite a scary thing for them at first. We used treats, toys and a gentle nudge to entice them through the Pet Door. It was quite amusing watching the pair of them learn this essential skill. All of the controls for the Pet Door are found underneath a concealed panel on the front, however you don’t need to touch this if you have the app installed and connected using the Hub as you can set it up and control it all via the app. There are many things you can do with this Microchip Pet Door Connect, gone are the days of a a whole in the wall with a simple plastic curtain covering it. So the app has recently had a refresh look and upgrade. The previous one that we had been using had a few flaws and annoying features but the new app has been just what we was looking for. Initially you can set up your pets profiles, with photos of them, their names, breed, sex and even what food they are on and any known medical conditions. The Pet Door has the ability to store up to 32 microchip numbers so having the personalised profiles makes it easy to keep track of your pets. The Pet Door allows you to create curfews. You can also lock or unlock certain pets in or out of the house. This is great for if one pet needs medication, or if you are decorating or have people round who maybe don’t like cats or dogs. It is all done via the app on your phone.

We’ve really loved having the curfew set up although I had to adjust it a few times to get the perfect times that suit our family. The cats were waking us up really early around 5:30-6am every morning so we moved their curfew to that time so they could go outside. In the evenings the cats were both wide awake and running around the house when we shut the curfew at 8pm, so we extended it to 10pm and this works really well for them. Although they have started to bring flying bugs into the house to show us. What I have really loved about this app is that you can their activity. Every time one of the cats go near or interact with the pet door it logs it on the app. Including if they just look at the door. The app also sends you notifications. That first day of giving Billy and Jake freedom when we left them indoors and went out was really scary. Every time my phone beeped a notification it was so exciting. The novelty wears off, but thankfully you can change the notification settings.

If you scroll down you can see all the insights from Billy and Jake. As you can see you it gives you an average time spent outside, a bar graph and when they spent that time. It’s so interesting. Billy spends a lot more time indoors and Jake is outside much more. However, when we have our back door open the pet door doesn’t register that they’ve come in or out, obviously, so some of the reports are not quite as accurate.

You can also share permissions with family or friends if you go away on holiday which is perfect! Especially now that our boys are much older and wouldn’t need to be fed three times a day. They can keep a track on your pet and know when the best time would be to feed them. We’ve been using the pet door for a good few months now. The quality hasn’t altered and with the brand new app it is just improving massively. Of course it all seems a little crazy having an app controlled cat flap or pet door in this case, but it’s been life changing for us as cat owners. I love the ease of adjusting things to suit our family and Billy and Jake. It’s an expensive cat flap don’t get me wrong, but I do think it’s been worth it.