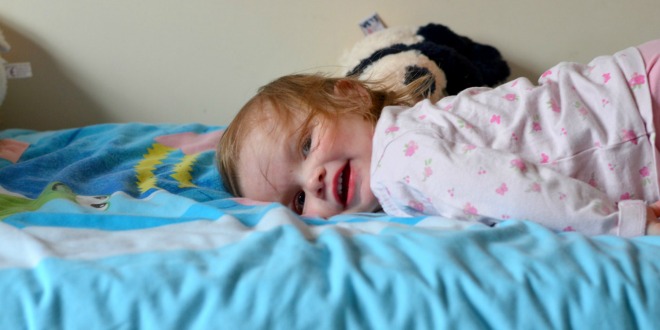 The 3rd Time Of Moving From Cot To Bed

P2 was just 15 months old when we moved her from cot to bed, or mattress on the floor to be precise. I don’t remember when I moved P1, I’m pretty sure she was much older. I thought we had plenty of time before it would be P3s turn but that time came and on the 23rd February she came out of her cot and into a toddler bed. The poor little mite has had a lot of changes in the past two weeks. It started when she graduated from sharing a room with her mummy and daddy. When her sisters were with their grandparents, we moved everyone’s beds around finally. We now have an adult space in the smaller bedroom with a tv, candles and a no toys allowed rule. Whilst the girls have the bigger room and are now all sharing together. So they’ve all had to adjust to changes. P1 is lucky as she’s used to sleeping through when P2 wakes and shouts in the night, but P2 and P3 have had to adjust to each other and its resulted in quite a few disturbed nights and rather early mornings. On a whole it’s been going great and the girls really love the extra space to play, spending far more time upstairs than down. But back to the point of moving from cot to bed. My BiL graduated from his toddler bed to a big boys bed and so there was a spare toddler bed going. Although P3 did have a cot bed, we weren’t happy that the ends were much taller than a normal toddler bed so we jumped at the chance of having the toddler bed. We were definitely thrown into the transition in a whirlwind decision that pretty much happened overnight. We didn’t even have a chance to purchase a bed guard it was that quick. For three nights she tumbled out onto the mattress we’d put for her to land on. The second night I even found her the other side of the room underneath the toy pram. She was so excited about her new bed, climbing in and jumping up and down shouting “Jum jum”. We now have the Lindam Safe & Secure Bed Rail

in place and so she stays in her bed throughout the night. Still waking as usual but on a few mornings the girls have woken and been able to play.

It definitely feels like she went from a vulnerable little baby to a fully fledged toddler overnight. Her independence grows each day and the days of cots for us are now over. Our last baby out of a cot and into a bed at just 17 months old. When did your children move into a big bed?