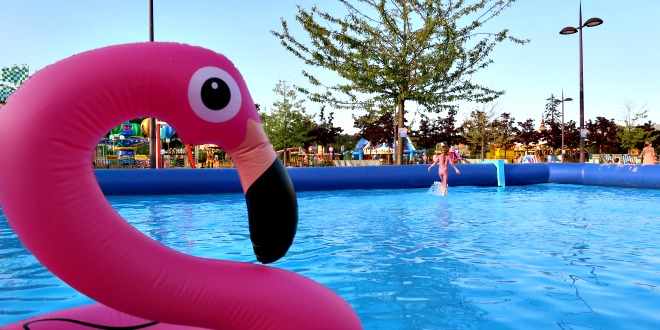 The Beach At Bluewater 2018

What does summer time mean to you? For my little tribe it means longer days, ice creams, sand, shorts and sandals (Although Hubby is still refusing to embrace man sandals or flip flops so his feet are so pale!)! We adore summer here. Last year The Beach at Bluewater arrived for summer and we had a great time so I was thrilled to be invited to their special preview launch last week. The Beach At Bluewater is located in the car park of Bluewater Shopping Centre in Dartford, Kent. It’s amazing how the transformation from car park to beach fair ground happens. I reckon a lot of hard work and imagination. Entrance in to The Beach costs £3 per person, then you have to buy tokens if you wish to go on the rides. You have the ability to pay the £3 each and spend the day on the sand and making use of the giant paddling pool. Tokens are still 10 for £10 or £1.20 each. It’s expensive in my opinion and would rather pay one off wristband fee as one ride would cost my family (three children) at least 6 tokens, not considering if we wished to ride on too.

The main area of course is the huge beach area complete with large paddling pool, surrounding the beach are fair ground rides and amusements. We took a walk around the area to get a grips of the layout as it was slightly different to last year. Then we let our eager daughters’ jump on their first rides, two different car ones. We then all hopped on to the Bumper Cars. My Grandad has been quite poorly recently, losing the sight in his right eye meaning he cannot drive any more. He could however have a go on the bumper cars and his face was a picture. We were all concerned about him getting bumped but actually every now and again Grandad made the bumper car bump. It was the funniest thing to watch. We sort of made our way round in a circle. P2 had a quick go on the giant inflatable slide but deemed it too slow for her. Then all three girls hopped aboard inflatable motor boats. Usually time is restricted I believe, but on this night the girls were allowed however long they wanted. It was really difficult to get them off actually especially P3 who was really good at steering her boat. The girls wanted to have a go on the amusements next. We tried hook a bag and hook a ball, both close to each other. I don’t know why children are so fixated on these things. The prizes were pretty good actually with P3 settling for a truck and the other two opting for Squishees. A big hit! We decided to sit down and have some dinner. There’s a hot dog stand with fries which was perfect for the beachy feel and weather. Then the girls were whisked over to watch a Punch and Judy show. The thing of nightmares in my opinion! However, they loved it. Lounging in the deck chairs on the beach whilst the grown ups ate in peace. Perfect! The show really added to the authentic fairground atmosphere.

The Beach offers some great refreshment stalls. We enjoyed ice creams, slushies and fizzy drinks. There is also a candyfloss stall with nutella crepes!! Whilst tucking into our delicious treats the girls were called over for some face painting. P2’s eyes lit up, P1 had her own definite ideas and P3 even asked for some willingly for the first time ever! P3 started by requesting a dinosaur on her arm, P2 was transformed into a dalmatian and P1 of course was a panda. The Beach at Bluewater is open from 12 midday until 9pm. On the event day we had until 7:30pm to enjoy the entire Beach Fairground so after the face painting session we headed for the smaller rides. As with all fairgrounds there are some height or age restricted rides however nearly all of the rides are suitable for younger riders. The girls loved going on the carousel and trampolines. It was pretty hard not to miss the giant shark towering out from the biggest bouncy castle I’ve seen. It was amazing. So we decided to have some time bouncing on this. Even Hubby and I joined in. It has two slides incorporated in it too! I’ve asked Hubby for one in the garden.. we’ll see. The day was rapidly drawing to a close and P2 was desperate to do some of the bigger scarier rides. Usually Hubby is the rollercoaster guy and I get away with it, but a lot of the rides at The Beach are ones that go around in a circle, or spin. Hubby isn’t great with those rides and experiences motion sickness, just like my Mum and my Grandad couldn’t do them so it was left to me. I get equally poorly on rides but could see how much P2 wanted to do them so off I went. You can see in the video I filmed below just how scary the above ride was. The Carousel Chairs was so scary!! But only in terms of the height. It was so incredibly high, I was squeezing onto P2 for dear life she found it hilarious. The ride just kept on going for what felt like forever!! It was great fun though.

We actually did the second ride last thank goodness. It was nearly closing and they’d given a notice to say last rides. A few of the staff went running for this specific spinning ride. P2 decided she wanted to as well. I hopped on nervously with her. Big mistake. This ride goes so incredibly fast. The staff can control the speed and the ones riding it were egging him on to go faster. P2 was laughing the entire time and so was I, as I held on to her with all my mite as I honestly thought she may fall out at one point. It was great fun but we both felt very dizzy. Just before the ride of doom, we finally let the girls change into their costumes and have a splash in the pool. Last year the water was quite cold and quite deep, this year it was the perfect depth and actually relatively warm considering. They loved it in there and I loved how they’d added inflatables for the children to play with. A great touch. We had such a lovely evening at The Beach Bluewater. It’s a great place to meet friends and explore. The toilets are a little disgusting but overall everything is so clean, friendly and it just has a great atmosphere. It’s even better when the sun is shining obviously!! Check out my video below of our fun filled evening and I hope everyone has a brilliant summer.