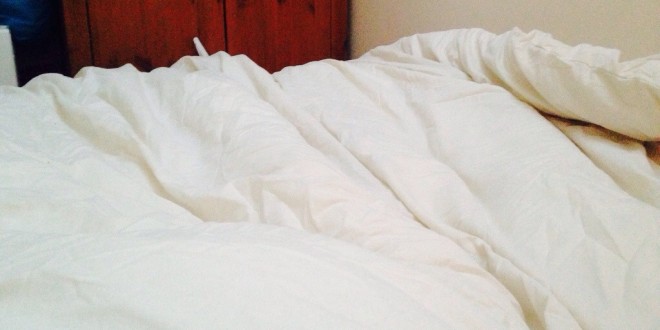 The GroAnywhere black out blind has been placed on the window, the blind pulled down over the top and the lights are dim. P1 is going to the toilet, getting herself undressed and brushing her teeth whilst I change P2s bottom and get her ready for bed. P2 is handed her half bottle of milk to drink whilst we read a bedtime book chosen by P1. Everything’s calm in the bedroom.

It’s just turned 7pm. The light gets switched off and both girls are put into bed. I feeds P2 her milk and listen to the sound of P1 drinking her bottle of water. Great big gulps. Then the bedtime war starts. P2 stops drinking after a couple of ounces, she wiggles and twists, turns and rolls all over her mattress. I’m laying on the floor propped up with pillows next to her mattress that’s laid on the floor. It’s uncomfortable. I frequently lay her back down, not talking and not making eye contact.

From beneath her bed, P1 sounds like she’s too having a fight with the ants in her pants. The bed is creaking at every move especially the sudden jolting ones. I have to frequently ask her to lay still as the racket is disturbing my attempts to keep P2 calm. This sparks conversation between P1 and I. A conversation about nothing. Excuses. Every excuse in the book. “I’m uncomfortable” “I’m thirsty” “I need a wee” “My leg hurts” “It’s really important though Mummy”.

What’s important to me right now is getting both my girls to sleep at a decent time ready for the next day. Ready for school in P1s case. What’s also very important to me is having “me” time and time with my hubby. Whilst my hips are in pain from laying awkwardly on the floor, I’m thinking of the washing up, the toys I need to clear up, the clean washing I need to fold and the floor I need to mop. But nope, our battle is continuing.

P2 is not giving up without a fight. I’ve huddled her close to me and watched her tired eyes roll and close, then ten seconds later she’s up again changing positions several hundred times. P1 is moaning, wriggling and still attempting a conversation with me despite the frequent requests to be quiet, each time my voice raising with frustration and therefore conflicting with the peace I’m trying to create for P2.

I check my phone, it’s been an hour and ten minutes now. It’s 8:10pm. I call hubby up to help with P1 because she isn’t clearly taking a blind bit of notice to me. He removes her from the room and asks her to stay in our bedroom alone until P2 is asleep. As if by magic, P2 finally gives in and is asleep within two or three minutes of her sister’s disappearance. I sigh but realise I’ve still got P1 to deal with.

P1 is replaced into bed with a firm warning that all her bedtime teddies will be removed if her behaviour continues. She’s reminded how important sleep is and that she has school tomorrow. Fifteen minutes of being back into bed and P1 is still attempting conversation, this time I’m ignoring and writing this post actually. There’s the sound of light snoring from P2 as she’s sprawled across her bed and the occasional yawn from P1.

At 8:40pm I can finally breathe. There’s complete silence except the soft breathing of both my daughters. I take a deep breath myself before making my way downstairs to fight my next battle… Housework vs Me Time! I’m longing for my own bed something that I wish my children would learn as soon as possible, preferably before number 3 arrives.

I wonder if this is all familiar to you too?