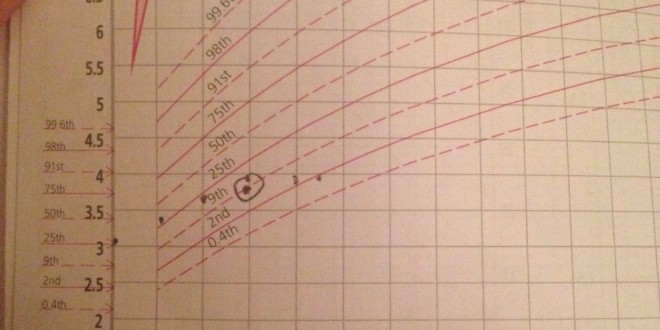 I felt so nervous waking up this morning. P3 was due to get weighed again to check the weight gain situation. I’ve been trying really hard to get more feeds into one day, I’ve been eating and drinking better too.

I woke the poor little lady up from her nice cosy slumber in her Doona and took her inside the children’s centre to be weighed. We were given the treatment from a health visitor rather than the volunteers. I placed her naked body onto the scales and there it was. She’s gain 1oz. P3 is now 8lbs 12oz at 9 weeks old.

I’m devastated. The only positive is that it’s a gain and not a loss. But 1oz is a very low gain. I was taken through to the breastfeeding clinic again this week to discuss latching and positions and techniques. I didn’t think I needed help with things but it turns out I do. I came away feeling very groped and loaded with great tips for weight gain. Boob compressions, tiger milk, feeding from both boobs in one feed, eating/drinking and lots of rest. I’ve also got to make sure that she’s having at least 8 feeds in 24hours.

Hubby and I have decided that if next weeks weigh in isn’t fantastic still then we’ll have to seriously talk about switching to formula. This week is going to be all about breastfeeding and weight gain.