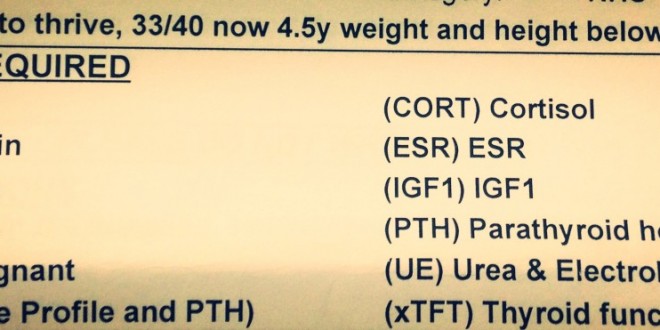 The Start Of Growth Tests

I’ve mentioned in a previous post that P1 was due to have an appointment at the hospital regarding her growth. They’ve been tracking her height and weight at the child development center where she has her physiotherapy sessions for the past two years and they have noticed that her growth has slowed which is concerning.

Well that appointment didn’t happen on 25th March, in fact it happened today. I got us all up and up the hospital for our 8:45am appointment. We were shockingly early so P1 had some time to play. I couldn’t prepare her for what was about to happen because I had absolutely no idea! She was weighed – 12.7kg. Her height was measured – 92cm. I even had my height measured but thank goodness they didn’t weigh me –  too fat comes to mind! She then had her legs measured and her blood pressure taken – 108/55 apparently a little high which was probably due to nerves. I could tell she was, her little face said it all and I just wanted to wrap her up close to me. The poor sausage has been poked and prodded all her life!

We were told P1 needed some blood tests, a chromosome test and also an X-ray. The pediatrician booked us to have the X-ray today. I wasn’t sure how to explain to P1 what an X-ray was, but she took it in her stride. Sat very patiently for nearly an hour, then sat on the X-ray chair and kept her hand still. The X-ray is to show the maturity of her bones. I hated seeing her sat alone as I was behind a screen. She looked too young and vulnerable. And to make the whole ordeal even worse, she left her Bambi toy behind, which is completely unlike her, she keeps her teddies in a tight grip! She didn’t even tell me she’d dropped it until we were back in the car. Then I felt very guilty because I wouldn’t go back inside to fetch him. I’ve promised a new one..

We have to go back for more tests 6 months after she’s had the blood tests done – I guess they have to see how much she grows in that period of time. We eventually left the hospital at 10:45am!

I am utterly proud of my big girl for today. She was so well behaved and so brave! I just wish all this would stop, all the tests, all the health issues – she’s perfect in every way and she’s getting older now, she understands things and I don’t want her to understand her medical problems. I want her to believe she’s the most beautiful, perfect girl in the world!! Because she truly is.