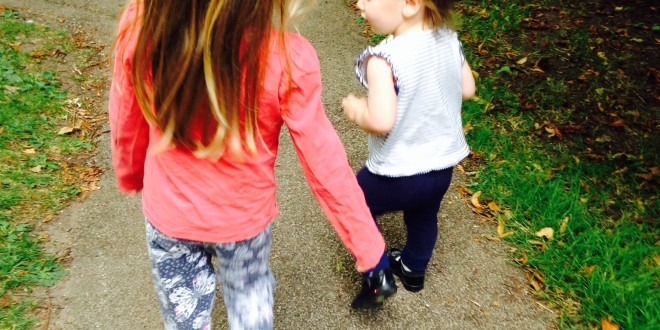 I never realised just how dependent P2 was on her big sister. A couple of weeks ago P1 went for a sleep over with my Grandad (their Great-Grandad) and originally it was meant to be for one night which turned into two nights. P1 had a fantastic time and actually came back really upset from missing him. But back at home things were different. P2 seemed very incredibly lost!! Despite our efforts, she spent the majority of the time snuggled on the sofa and at bedtime she sobbed pointing towards her sisters bed. When P1 arrived home, the loudest squeal came from P2 who went running towards her nearly knocking P1 flying to give her the biggest hug.

P1 is having another couple of nights with her Great-Grandad. He’s treating her to a trip to London to see Buckingham Palace and others bits for her to do whilst up there. I have no doubt that she’ll have a fantastic time again and I’m also very sure she’ll wear my 83 (maybe 84) year old Grandad out!! Again, P2 has seemed a little bit lost. Not as bad as before but still enough to be quite upsetting to watch.

When P1 is away, even just for a day, we make even more of an effort to entertain her and fill her with exciting things to do in hope she’ll forget that she hasn’t got her sister at her disposal. In the mornings P2 is usually quite content to just sit with her sister eating their breakfast and doing some drawing but today I’ve had to read every single book on her book shelf, play cars, play with her Little People House, do her animal puzzle with her five times and have grapes thrown at me all before 8am!!

I don’t mind. It’s lovely to spend proper quality time with her, but I can just tell I’m not good enough compared to her big sister who runs around and makes P2 have the most heart melting giggle ever. That sound is so missed when P1 isn’t here. Hubby can make P2 chuckle, I can make her chuckle but it’s different. The laughter they share together makes me want to cry each time I hear it. P2 depends on P1 for reassurance, for learning, for fun, for fighting and for a unique type of love.

The play they share is different. No matter how hard we try it will never be the same as the very precious sibling bond my girls share.