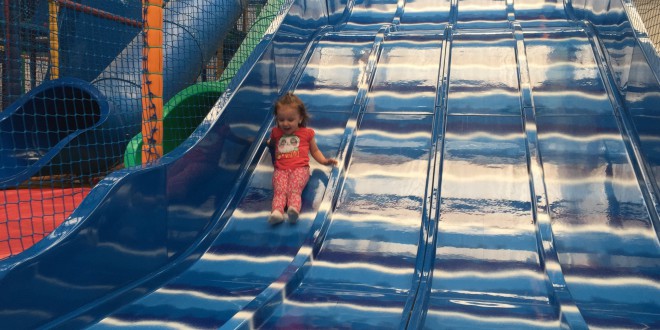 When P3 was born P2 went from a tiny toddler snuggled in my arms to this huge giant of a child. Since turning two she’s changed so much that it’s really scaring me. She’s no longer a baby in any sense and has become such a grown up and independent little sausage. The things she says are just immensely amusing. “No Mummy I’m not a sausage I’m P2 (obviously she doesn’t call herself P2…)”

She’s taking herself to the toilet, washing her own hands with soap and flushing. She feeds herself and chooses which option of clothes to wear. P2 knows exactly what drink she wants and let’s us know when she’s hungry. She can count to 10 and draw faces. She says “I love you….” At least 20 times a day to each of us.

We’ve spent the whole of her life shadowing her every move when in public. Hubby has always been very protective of her and we both never wanted her to get harmed. By doing this we’ve created a side of P2 that is shy and anxious in certain situations. It’s not like she becomes nasty or anything in these situations but it’s something we need to address whilst she’s young. Today, we went to soft play. We have been for a while, in fact I’m not sure we’ve been to this specific one since she turned two in February. P2 has changed so much since then. She no longer has dummies and she walks everywhere. She’s found her own voice. I thought it was about time we let her spread her beautiful wings that little bit further and allow her to explore the soft play without one of us by her side constantly.

It was just P2, P3 and me in the soft play. With P3 more on the move yet still so tiny, and the soft play was busy I felt I needed to keep a very close eye on her. P2 happily played within eye shot. She kept calling for me to help her do things I knew she could do on her own so I encouraged that. I turned my back for only a few minutes when I saw her make a dart for the bigger area and head towards the slide. Something she’s only ever done with me.

I watched her from afar. She was being so brave. So confident. So able. There she was climbing the stairs and sliding down the pretty fast slide all by herself. The smile on her face was magical. My heart melted and I wanted to cry. I got a few weird looks as I applauded P2 for being such a big girl. They don’t now that she’s always been assisted. They didn’t know that my tall two year old was our sweet baby still.

I filmed her. I sent it to my MiL and hubby. Both of them remarked about how grown up she is now. There’s now no need to wrap our toddler in bubble wrap like we always have done. Of course she’ll always be my baby at heart and there’s no way we’ll ever be one of those parents who doesn’t know that their child has been crying for the past five minutes whilst they drink their coffee or play on their phones.